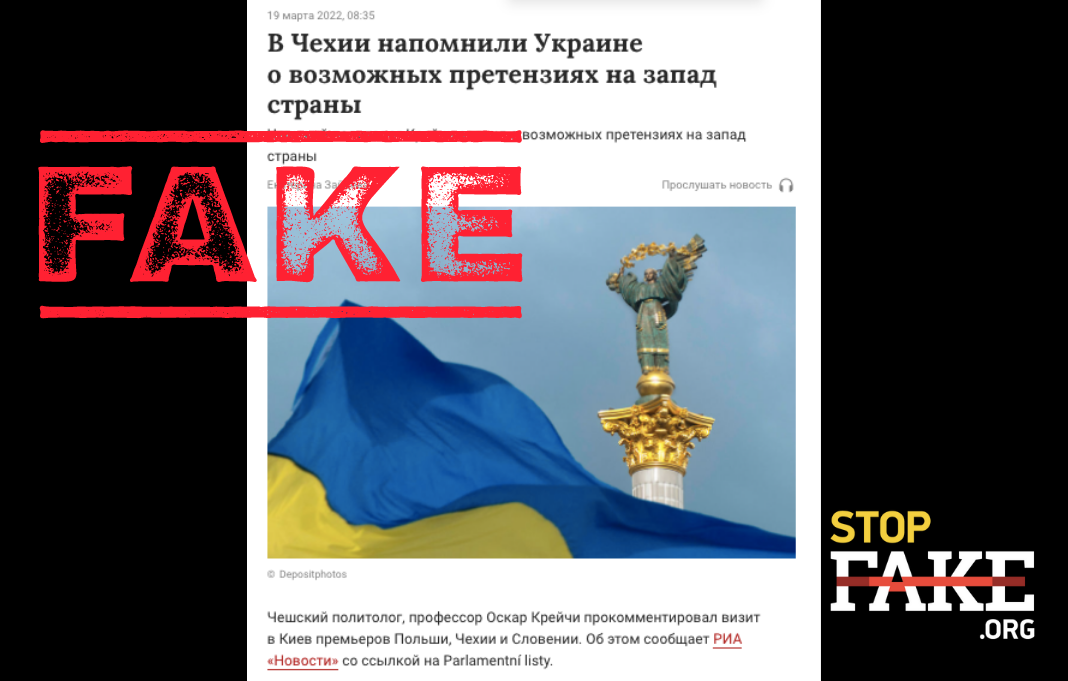 Czech political analyst and author Oskar Krejčí is known for his pro-Russian views and does not represent the official position of the Czech Republic. Czechia respects Ukraine’s territorial integrity and is providing comprehensive assistance at this time of full-scale Russian invasion.

Russian media have featured stories focusing on a comment made by Czech political analyst and author Oskar Krejčí, who said that the Czech Republic allegedly has claims “to the western territories of Ukraine”. Russian publications positioned this quote as an official Czech position.

Krejčí did not specify who exactly could claim territory on Ukraine’s western border. He did point out however that Kyiv, being focused on Russia’s actions, does not appear to attach much importance to such a turn of events, Pravda.ru writes.

Oskar Krejčí was interviewed by the Parlamentni Listy a privately owned internet portal, that is widely viewed as a platform for disinformation and which, despite its name,  has nothing to do with the Czech parliament. Krejčí was asked about the political situation in Eastern Europe and the recent visit to Kyiv of the Czech, Polish and Slovenian Prime Ministers to meet with Ukrainian President Volodymyr Zelensky. Krejčí said the following about the visit:

“This is a gesture, and it belongs to the politics of gestures. This visit could help stop the hostilities only if, after talks with Kyiv, the Prime Ministers begin talks with Moscow. Then this gesture would become a contribution to the cause of peace. Prague left the negotiating position many months ago. And Kyiv should not forget that in addition to questions concerning Ukraine’s eastern border, someone could raise questions about the western border.”

Krejčí goes on to say that nothing can prevent the defeat of the Ukrainian army, that the Russian army is moving slowly because it is “trying to prevent great losses of its soldiers and civilians” and dutifully repeats other Russian propaganda tropes.

Krejčí’s pronouncements, which closely mirror Kremlin narratives, are regularly featured in the Russian media. Oskar Krejčí predictably calls the Euromaida revolution a “coupd’etat”, posits that the self-proclaimed Donetsk and Luhansk People’s Rebublics cannot be called “completely illegitimate” and declares that Russia always wins wars. Prior to Russia unleashing its invasion on Ukraine, Krejčí said he was warier of Kyiv attacking the Russian controlled separatist statelets in eastern Ukraine than Russia attacking Ukraine.

A Communist Party member since the late 1960s, from 1975 until the end communist rule in Czecho-Slovakia Krejčí was an agent of the country’s Státní bezpečnost (StB) intelligence and counter-intelligence agency, which persecuted any activity that was considered opposition to the Communist Party of Czechoslovakia and the state.

The Czech Republic has never questioned Ukraine’s western borders or made any claims to any Ukrainian territory. Czechia has supported Ukraine throughout the years of Russia’s aggression against Ukraine, condemned the occupation of Crimea and other parts of the country and called for an end of Russia initiated hostilities. Since the beginning of the full-scale Russian invasion of Ukraine, the Czech Republic has been helping Ukraine in every possible way, including militarily. The Czech government has also released from liability those citizens who decide to fight on the side of Ukraine in the war with Russia.