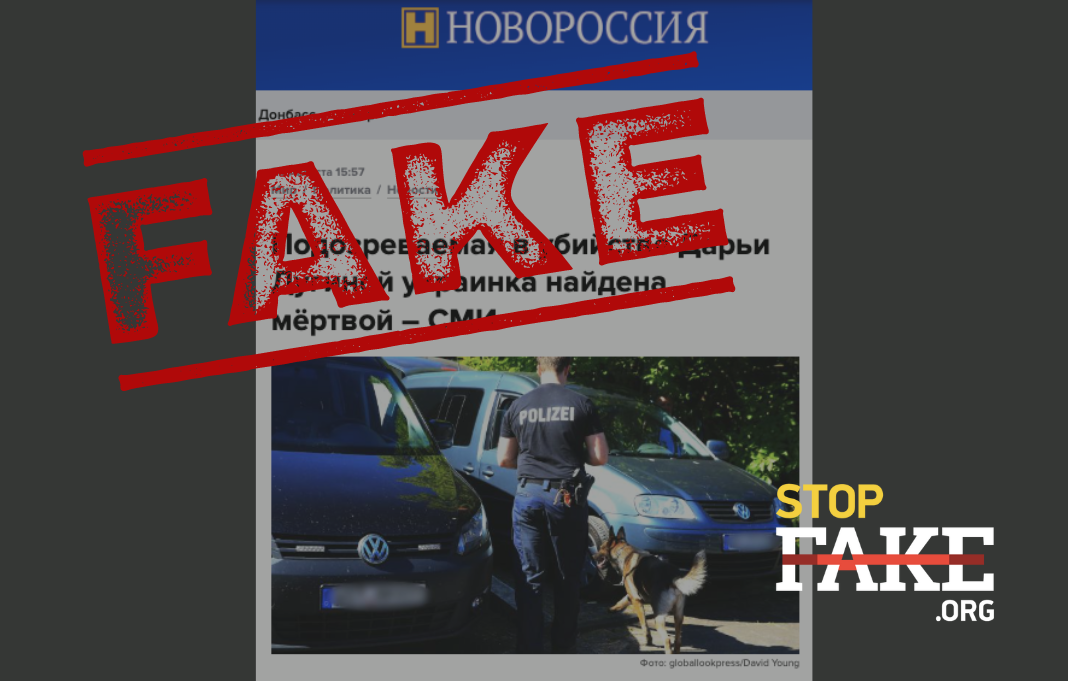 First anonymous Telegram channels, then a story in an Austrian tabloid using an old photo from 2020, and then Russian mass media, all claimed that Daria Dugina’s alleged murderer Natalya Vovk was herself murdered in Austria. Russian media used this fake to reinforce the narrative that Ukraine is allegedly to blame for Dugina’s death, and then themselves denied that Vovk was in fact killed.

Social media, various Telegram channels, as well as pro-Kremlin media disseminated fakes claiming that that Natalya Vovk, whom Russia accused of murdering Russian propagandist Daria Dugina, was allegedly killed in Austria. “The woman was found with 17 stab wounds and a note in her hand,”the propagandists wrote.

The first publication to write about Natalya Vovk being “murdered” was the Austrian Exxpress. The site presents itself as an “elite tabloid”, although media experts consider this publication to violate journalistic standards. In the story about Vovk’s alleged murder, the headline itself already contains an element of manipulation, stating that Vovk is only “probably dead”: “17 stab wounds: the murderer in the case of Daria Dugina is probably dead.” The story lacks facts —  its only sources are anonymous Telegram channels. To illustrate the story the author used a National Guard identification card — but with a photo of Margarita Simonyan, the main Russian propagandist from Russia Today. This “document” is actually a popular parody meme that was circulated in response to the Russian Federal Security Service’s “irrefutable” evidence that Ukrainians were involved in Dugina’s murder, which quickly appeared online.

Remarkably, both Telegram channels and social media, who were the first to spread information about Natalya Vovk’s alleged murder, made it clear to readers that “Ukrainian special services are covering their tracks” and that perhaps such news will help “hide Vovk somewhere in Europe”. But soon after the Austrian tabloid’s article was published, Russian media quickly debunked their own fake and massively spread its refutation. In particular, Russian journalists noted that the tabloid used an old photo in this news, which was first published by Russian REN TV back in July 2020. The photograph used to illustrate Vovk’s “murder” showed a 26-year-old woman killed by her fiancé in Moscow. And later, Russian publications also disseminated the refutation of this entire story by the Austrian Internal Affairs Ministry,  as reported by RIA Novosti.

It is also worth noting that spreading fakes and disinformation through anonymous Telegram channels that are then picked up by traditional media is a common Russian propaganda method.

Russian media used this fake to strengthen their version about Ukraine’s involvement in the murder of Dugin’s daughter. To that end, the Komsomolskaya Pravda website, cites a Russian “expert” who stated that “it would be ideal for Kyiv if the perpetrator of Daria Dugina’s murder simply disappeared. She is no longer needed and is even dangerous. This is a traditional tactic of terrorist groups that eliminate killers. She should surrender to the Russian authorities. It at least would save her life”. The same statement is repeated by another “political scientist” on the Vzglyad website: “One way or another, I assume that Natalya Vovk’s death is inevitable. Most likely, she is no longer valuable to the Ukrainian special services, so it would be quite logical if they want to get rid of her”.

Daria Dugina died on August 20 when the car she was driving exploded. At first, Russia blamed Ukraine for what happened, although Ukrainian authorities announced that Ukraine had nothing to do with these events and that Ukraine, unlike Russia, was not a terrorist state. The version of the Russian Federal Security Service has many inconsistencies, such as, the “proof” of Ukraine’s “guilt” consisting of entirely of forged documents.