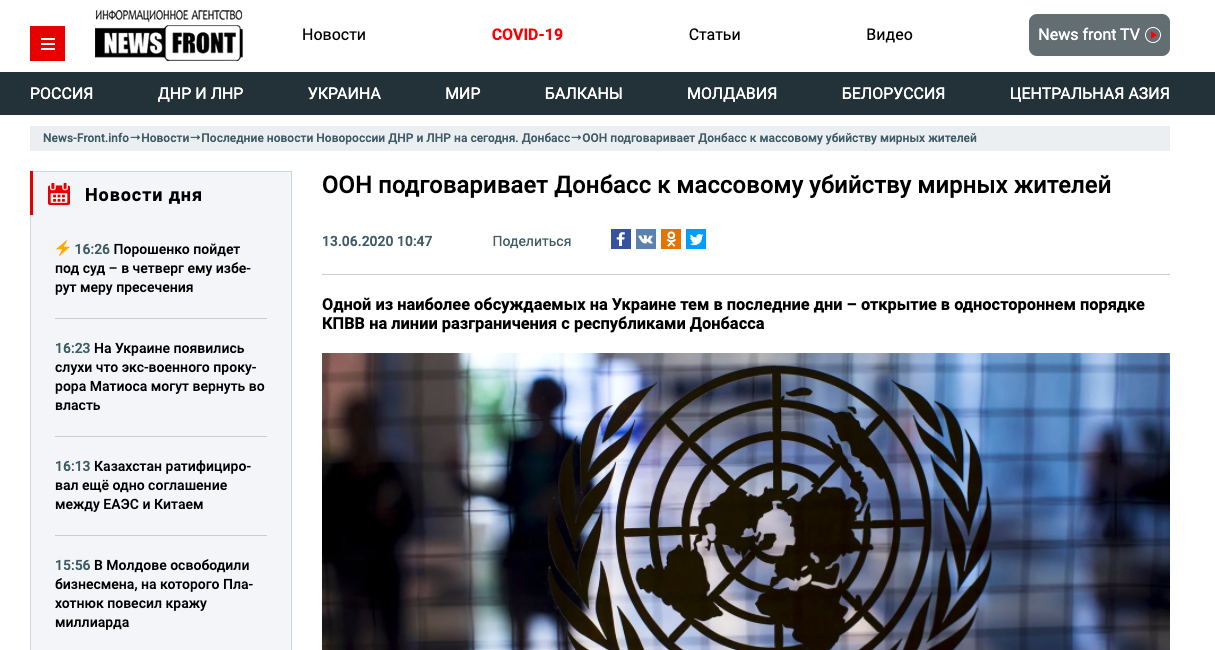 The Russian pro-Kremlin publication NewsFront called the recent death of a 59 year old man at the Mar’inka checkpoint between Ukraine and Russian occupied eastern Donbas a “provocation orchestrated by Ukraine and the UN Mission”.

Ukraine bears the responsibility for the man’s death NewsFront claims because Ukrainian authorities opened up the checkpoint without coordinating the move with the Russian militants.

Claims that Ukraine did not inform the Russian separatists about opening two crossing points at Mar’inka and Stanytsia Luhanska are completely fake. Ukraine’s leadership informed the separatists directly and in advance that out of humanitarian considerations the two checkpoints would be partially reopened on June 10. Although the Ukrainian side of the crossing points opened on time and people were processed and allowed to pass through to the occupied side, Russian militants refused to allow people to enter and installed anti-tank fortifications on their side. At the same time both the self-proclaimed Donetsk and Luhansk People’s Republics announced that they had opened a humanitarian corridor but Ukraine was blocking it and not allowing the movement of people.

According to a representative of internally displaced immigrants Denys Kazansky, the militants’ decision not to allow people to pass through to the occupied territories is politically motivated.

“Opening up the crossing points is first and foremost in the interests of the people in the occupied territories who need to receive their pensions and social benefits. But the militants refuse to let them out. Apparently so later they can shout about the terrible Ukrainian blockade and genocide” Kazansky wrote on his Facebook page.

The militants’ refusal to let people through resulted in many being forced to spend the night directly at the checkpoint. On Friday, June 12, the UN Monitoring Mission in Ukraine reported that a 59-year old man trying to reunite with his family in Donetsk died in the militant controlled side of the Mar’inka crossing point. The man had health problems and had spent several months in various healthcare facilities in Ukraine-controlled territory.  He had been waiting for an opportunity to cross the contact line since June 10. In the evening of 11 June, he felt unwell and was taken to hospital by. Shortly afterwards, he returned hoping to cross into the self-proclaimed Donetsk People’s Republic (DPR) the next day. He died of a heart attack several hours after.

There are many other instances where militants have not allowed people to return to the occupied territories. On June 11 a woman became ill in the gray zone after DPR guards would not let her through. Unable to move, she was not offered any help by the militants and was finally evacuated by Ukrainian authorities and the Red Cross. Another two people were kept in their car in front of the militant checkpoint for more than three days, stubbornly preventing them from driving home to the occupied territories.

Ukraine continues to urge the militants to resume regular crossing point passage but the militants continue to block them, claiming they are doing so because of the high incidence of corona virus infections in Ukraine.

Militants are insisting that people be allowed to reenter the occupied territories only according to lists that have been previously agreed on.

Ukraine’s Ministry for the Reintegration of Temporarily Occupied Territories called such demands unacceptable. More than 280,000 who live on the territory of the so-called Luhansk People’s Republic receive social benefits from Ukraine; it is completely unreasonable to demand that such lists be drawn up.  According to the Ministry, the real reason for not letting recent graduates out of the occupied territories is not to allow them to study in free Ukrainian universities.