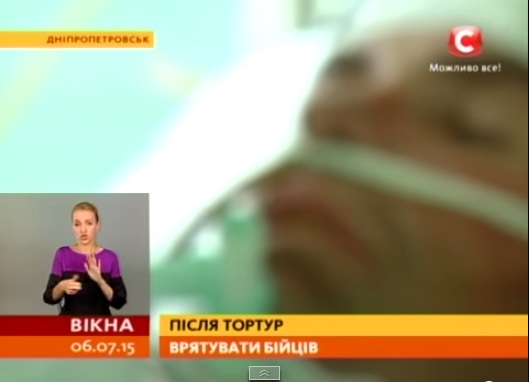 On July 6, the Ukrainian STB television channel falsely reported on the medical mistreatment of Ukrainian soldier Roman Kapatsiy, who had been recently released from captivity from the self-proclaimed Donetsk People’s Republic. The 28th Reconnaissance Brigade fighter and father of six children had been was mobilized in early 2015. Severely wounded in battle, he was held prisoner near the town of Mariynka (or according to other sources, near Elenovka).

However, STB wrongly claimed that Donetsk physicians neglected to treat Kapatsiy’s serious wounds: “As a result of torture, the man got blood poisoning. However wounded [as he was], he received nothing except intravenous glucose. Donetsk’s so-called doctors didn’t give him treatment, but only supported him so that he didn’t die until a [prisoner] exchange.”

This is false. Kapatsiy in fact spent 34 days in a resuscitation ward, and doctors at Donetsk’s regional trauma clinic operated on him seven times and carried out eight blood transfusions. The clinic’s head, Alexander Oprishchenko, estimates the cost for treating Kapatsiy at 185,000 hryvnias. The Oplot television channel even presented supporting documents.

The chief physician of Dnipropetrovsk’s Mechnikov hospital, Sergey Ryzhenko, confirmed this. He said that Kapatsiy had been transported to his hospital from Donetsk. “They provided treatment and operated on Roman,” he told StopFake.org. “Someone thought this up, that Donetsk doctors didn’t give him help. I evaluated his release from the [Donetsk] hospital and I have to stress that Donetsk doctors gave him good help. We have no claims against the Donetsk doctors.”

StopFake.org cannot verify claims about the torture of Kapatsiy before he was taken to the Donetsk hospital. His mother says that he was mistreated, while Donetsk physicians say that Kapatsiy received his severe wounds and internal injuries during fighting.

According to information released on July 22, Kapatsiy remains in critical, but stable, condition.