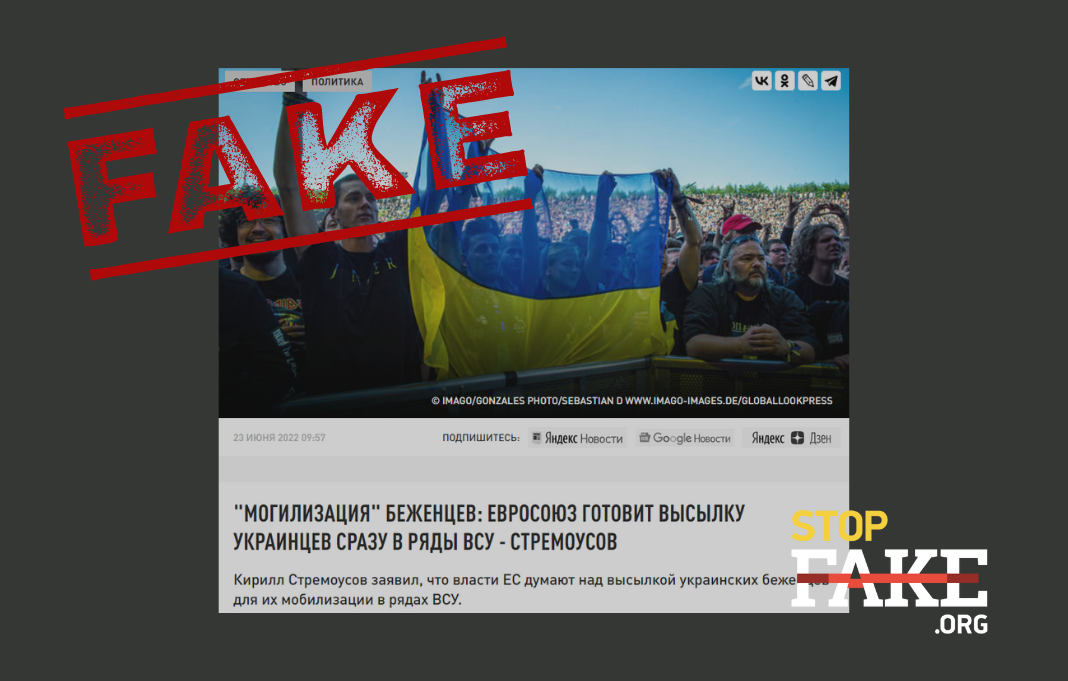 Ukrainian citizens cannot be deported as they entered the European Union legally, forced into the move because of Russia’s invasion.

Russian media have been spreading disinformation claiming that the European Union is considering the deportation of all Ukrainian men from the territory of the EU in order to help Kyiv bolster the ranks of the Ukrainian Armed Forces.

These stories are based on an Ukraina.ru interview with Kirill Stremousov, the so-called deputy chairman of the military-civilian administration of the Russian occupied Kherson region, a collaborator who is accused of treason and wanted by Ukrainian authorities.

“The European Union is considering the possibility of deporting all Ukrainian men to Ukraine for military mobilization. Not mobilization but graveyard-ization” Stremousov told the notorious pro-Kremlin publication Ukraina.ru.

None of these require the deportation of Ukrainian men for mobilization in Ukraine’s Armed Forces.

Protocol 7, Article 1 of the European Convention on Human Rights states: “An alien lawfully resident in the territory of a State shall not be expelled therefrom except in pursuance of a decision reached in accordance with law.”

The UN High Commissioner for Refugees report states that since the beginning of the Russian invasion, almost a third of Ukrainians have been forced to leave their homes. “This is the largest human displacement crisis in the world today. 7.1 million people have been displaced by the war in Ukraine and 15.7 million are estimated to urgently require humanitarian assistance and protection” says the UN.

According to UNHCR data, as of June 17, 2022, 7,567,024 Ukrainian citizens have crossed EU borders. 3,407,378 of those have applied for temporary protection and according to EU law, they are prohibited from being expelled from the countries where they have sought refuge.

According to Article 9(1) of the Directive on Common Procedures for Granting and Withdrawing International Protection (2013/32/EU), the presence of an asylum-seeker in the territory of an EU Member State is lawful.

The UN Refugee Convention from July 28, 1951, lists a number of reasons prohibiting the expulsion of refugees to the country from which they arrived.

In particular Article 33 of the convention prohibits the expulsion or return of refugees to countries “where his life or freedom would be threatened on account of his race, religion, nationality, membership of a particular social group or political opinion.”

Russia’s military actions on the territory of Ukraine are not only a direct threat to life but are also recognized by some countries as genocide. Among such countries are Estonia, Latvia, the Czech Republic and others.

To deport all men to Ukraine, according to collaborator Kirill Stremousov, the European Union must resort to a number of violations:

If, as Stremousov claims, the European Union is now considering such a possibility, then there must be some evidence of this, for example, in the form of an official request from the Ukrainian side or an official statement from the EU about the possibility of such a decision. Neither Ukraine’s Foreign Ministry nor the Defense Ministry, as well as representatives of the European Union, have come forward with such initiatives.

StopFake has debunked previous similar fakes, such as the claim that Ukraine had asked Poland to deport all men back to Ukraine so they could be sent to the front. To support this fake, Russian propagandists resorted to a forged letter from Ukraine’s Foreign Minister.

Other fake documents surfaced earlier, purporting to show Ukrainian government plans to mobilize women and school graduates into the army. Fake information was further disseminated claiming that Ukraine wants to introduce conscription from the age of 16.