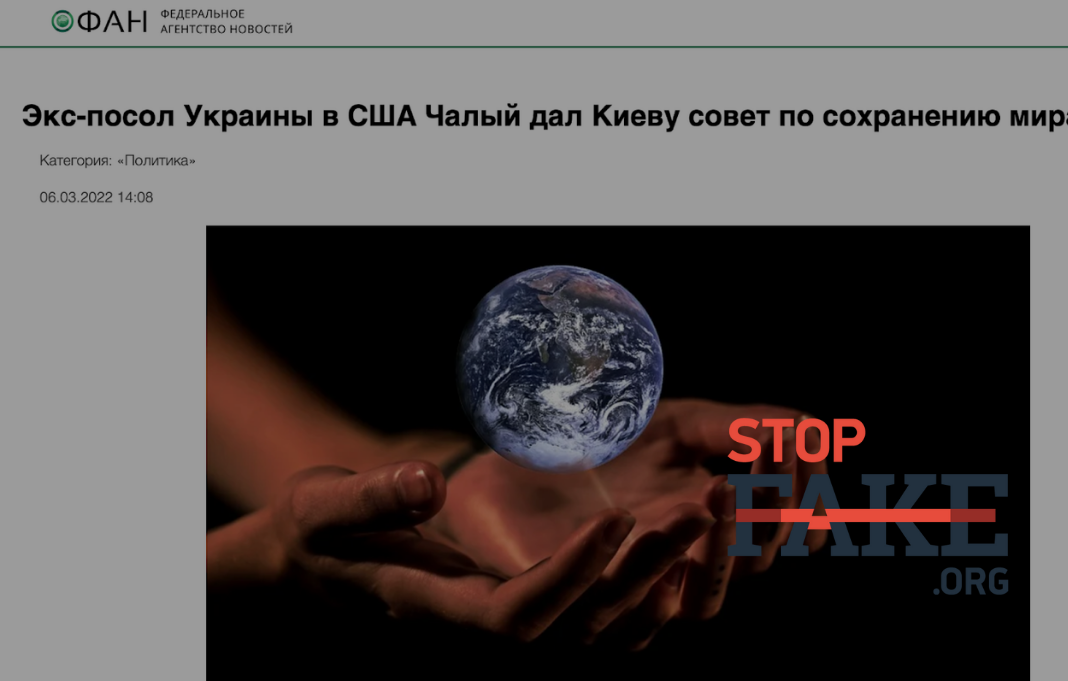 Valeriy Chalyi, the former Ukrainian ambassador to the United States (2015-2019) has not made any statements calling for Ukraine to be a neutral country. Quite the opposite, Chalyi has always emphasized that Ukraine’s continue Western integration is clearly enshrined in the Ukrainian Constitution.

Russia’s Federal News Agency (riafan) claims that Ukraine’s government can easily achieve peace with Russia by having Ukraine declare itself a neutral country. The agency claims that this idea was put forth by former Ukrainian Ambassador to the US Vitaliy Chalyi, who allegedly said that neutrality is the only formula that can guarantee peace in Ukraine.

“Neutrality is a status that is affirmed in Ukraine’s declaration of sovereignty” Riafan points out, seemingly quoting Chalyi.

Ambassador Chalyi however, never said that Ukraine’s government must adhere to neutrality because neutrality figures in the country’s Sovereignty Declaration. He also refutes the propagandist’s claim that Ukraine’s non-aligned status is enshrined in Ukrainian law.

Ukraine’s Declaration of Sovereignty, which was adopted on July 16, 1990 does indeed contain a clause on state neutrality. However, the document was enacted in Soviet times and refers to Ukraine as the Ukrainian Soviet Socialist Republic, an entity that has not existed for 30 years.

The Ukrainian SSR solemnly declares its intention to become a permanently neutral state in the future, not participate in military blocs and adhere to three non-nuclear principles” not to accept, produce or acquire nuclear weapons” the Declaration reads.

Writing on his Facebook page, Valeriy Chalyi emphasizes that Russian media references to the Declaration of State Sovereignty as the basis for legitimizing neutrality “does not stand up to criticism”. The USSR has long since collapsed and the legal basis for the state sovereignty of modern Ukraine is the Constitution, Chalyi points out, which does not mention any neutrality or nan-aligned status. Quite the contrary, Ukraine’s Constitution enshrines the country’s course for full membership in the European Union and NATO. That is why the narrative of Ukraine’s neutrality is completely inapplicable.

Valery Chalyi also repeatedly stresses that Ukraine’s non-aligned position in 2014 led to the Russian occupation of Crimea and parts of Donetsk and Luhansk regions. He also noted that neutral countries always have international security guarantees: Ukraine also had such a document – the Budapest Memorandum – which Russia brazenly violated by attacking Ukrainian territories in 2014 and on February 24, 2022. “Only armed resistance to the aggressor and the end of the war with our victory will lead to security and peace. There is no other way!” Chaly emphasizes on his Facebook page.