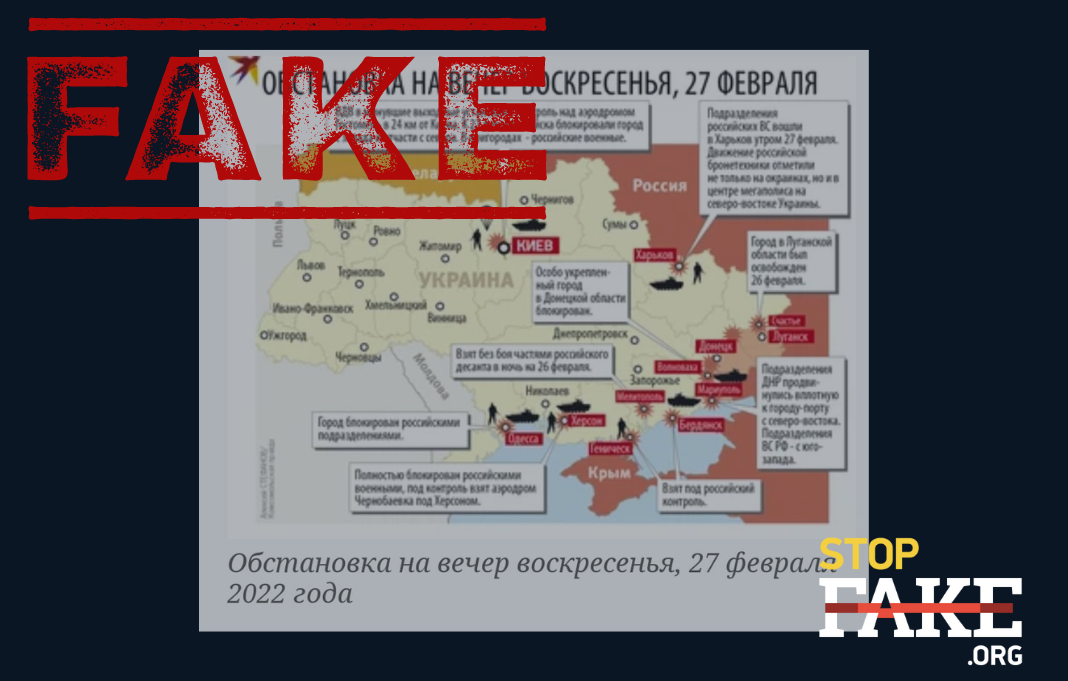 During the five days of Russia’s assault on Ukraine, the Kremlin has remained silent about the casualties Russia is incurring in this act of aggression and has continued to lie through its subservient media about the progress the Russian army is making.

On Sunday evening the propagandists Komsomolskaya Pravda published a map graphic showing what it claims to be the military situation on the evening of Sunday, February 27. The publication mapped out points where according to them, Russian invading forces had made successful breakthroughs and established control. In fact most of the claimed victories are lies. Of all the areas marked on the map as being under Russian control, only the Azov port city of Berdyansk is actually occupied by the Russians.

This is confirmed not only by the Ukrainian Armed Forces, whose information is updated several times a day, but also by the fact that the governments of other cities the Russians claim to have conquered, continue to perform their duties and local residents continue publishing numerous videos show that despite ruthless attempts to break through Ukrainian military defenses, the Russians are met with fierce resistance and are unable to capture these cities.

Russia claims that it captured the Hostomel airport on February 27. In fact, the airport, which is part of the Antonov aviation company is under Ukrainian control since February 24. That was the day that fierce battles raged for the airport, battles that resulted in a Ukrainian victory.

Russian propagandist media claim that Russian troops entered Kharkiv on February 27. In fact, on that day the Ukrainian military completely regained control of the city and are currently conducting a clean up of Russian sabotage and reconnaissance groups. The city is under constant fire from Russian Grad missiles, air raid sirens sound constantly and nonstop explosions are reported on social media.

Oleh Synehubov, the chairman of the Kharkiv Regional State Administration confirms that the Ukrainian armed forces continue to successfully repel enemy attacks. On the night of February 28, the Ukrainian army fought off the Russian invaders all night, destroying columns of their equipment on approach.

The city of Shchastia remains under Ukrainian control, however as a result of Russian shelling, the city is 80% destroyed.

While Mariupol remains one of the hottest spots in the Donetsk region, the Russians have not been able to break through Ukrainian defenses. This was confirmed by Pavlo Kyrylenko, the head of the Donetsk Military-Civil administration, who continues carrying out his duties. Kyrylenko added that fierce battles are raging for Mariupol and the town of Volnovakha.

Russian propagandists claims that the port of Kherson is surrounded and the city’s Chernobayevka airfield is under enemy control. In fact the Russians continue to attack in the direction of Kherson, but the Ukrainian military continues to hold its defensive positions. On the night of February 28, the nearby city of Kakhovka was shelled by Grad missiles.