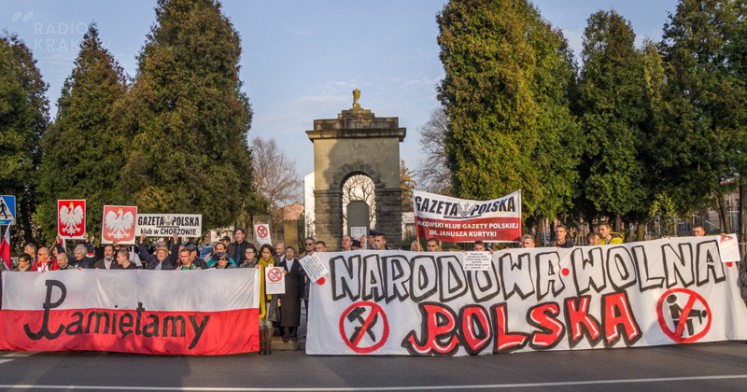 On November 9, Russian TV channel Zvezda (eng. – The Star) issued a news item showing hundreds of people that gathered near the monument to soviet soldiers in Polish town of Nowy Sącz. They allegedly went to protest against authority’s decision to demolish the monument to soldiers of the Red Army, erected in 1945.

This news was disseminated around social networks and other websites.

However, the situation was actually exactly the opposite of described one.

The TV channel Zvezda refers to Polish site radiokrakow.pl. But RadioKrakow has the following description of this news: “Nowy Sącz: Dozens of people held a demonstration at the monument to the Red Army. They wanted to remind about the necessity of removal of such antiquities of Communism in other cities. The protest took place in the Freedom Avenue in Nowy Sącz, near partly demolished monument to the Red Army. According to Jerzy Bukowski, there are still about 300 such monuments in the country”.

Then it is reported that not only Polish but also German and Russian journalists from Kaliningrad were present at this event. One of the protest organizers reminded about the history of Russia, the Molotov–Ribbentrop Pact, Soviet aggression against Poland and Stalin repressions.

The photo used by Zvezda strikes the eye. You can clearly see the poster with symbols of the Soviet Union, hammer and sickle, stricken through. It means that Poles did not protest for some Soviet or Russian thing, but against it.

There is a photo spread about this event on the site of Polish radio. The photos speak for themselves.