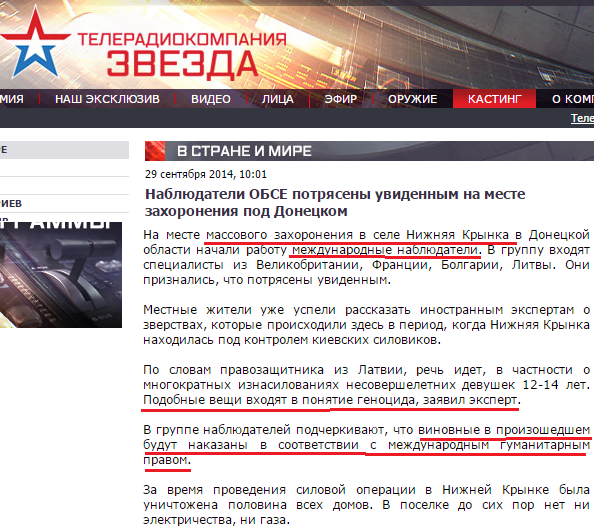 The Russian state television channel Star, which is supervised by the RF Ministry of Defense, published information on its website on September 2014, stating that international observers were shocked to find mass graves in the village of Lower Krynka in the Donetsk region. It also said that they had found eyewitness to the crimes that had been committed by “Kiev militarists,” a “genocide” of the local population. This information is still spreading among social networks. Therefore it needs to be looked at in more detail.

The names of the observers are not given in the article, so let us turn to the official sources.

A special monitoring group of the OSCE referred to the situation in Lower Krynka in a report dated September 24, 2014, stating that representatives of the DNR had directed the international observers to a site of the anonymous burials. There were two graves near the Kommunar mine, each of which contained two bodies. There was another burial site with the names of five people. The dates of their deaths was listed as August 27, 2014. The inscription read “Died for Putin’s lies.” The report emphasizes that a forensic examination of the remains had not been performed. The next paragraph states that the bridge in the village was blown up.

A report dated September 29, 2014, states that on September 27, the OSCE, again accompanied by representatives of the DNR, visited unmarked graves in the village. The report addresses three areas: two near the Kommunar mine, and one on the outskirts of the village.

The Seventh Report of the High Commissioner for Human Rights on the events in Ukraine, dated November 15, 2014, also gives an account of these graves. It indicates that they found the bodies of members of an armed group killed in combat in one grave. As for the other four bodies near the mine, the representatives of the DNR insist that these people were executed by representatives of the APU. The Ukrainian side rejects these accusations. The report stated that on September 26, National Security and Defense Council of Ukraine announced an investigation into crimes against civilian representatives of armed groups.

The international non-governmental organization Amnesty International also presented its heavily detailed report on the killings in the conflict zone in eastern Ukraine. It mentions that the leader of so-called DPR Alexander Zakharchenko reported 40 dead civilians, and Russian Foreign Minister Sergei Lavrov said that 400 bodies were found in the graves.

On September 26, 2014, representatives of the Amnesty International visited this village, studied the burial places and spoke with local residents and journalists. The organization confirms that the grave with the remains of five people contained those who were killed in the fighting. As for the other four people, according to AL, there is strong evidence of pre-trial punishment by representatives of the APU. At the time of publication of the report, only one of the four bodies had been identified, a 21-year-old local resident, who collaborated with the DNR. The remaining three bodies presumably belong to men who are considered missing.

The Russian social network Vkontakte page for the Lower Krynka settlement posted this on October 4: “Having had a small monitoring of the incoming information and after a talk with local residents, we found out that there are two burial sites. One is located near the Shinomontazhkoy bridge (a store near a gas station on a farm). Five people were buried there, as evidenced by a table with the inscription “Died for Putin’s lie,” as well as the names, dates of birth and death of four people. The name of the fifth is not specified on a plate, but there are a number of military tickets or tokens. Two more wells are found near the Komunarskiy mine – two bodies in each. One of the victims was identified; it was a resident of the village Kommunar, born in 1993.”

The group additionally posts regular updates about the devastation and maintains information about missing residents. Neither genocide nor rape is mentioned by the group.

At the same time Russian media has wildly exaggerated the number of dead civilians. According to Zaharchenko, 40 bodies of tortured locals were found in “brotherly” graves. National networks embellish his accounts with horrific details and revelations by “witnesses.” Some sources contain information about 400 bodies.

TC Star also reported: “According to human rights representative from Latvia, it is, in particular, the repeated rape of minor girls 12-14 years. Such things are part of the concept of genocide, said the expert.” It seems here that they are discussing Ejnars Graudins, whom the Russian media is fond of quoting, presenting him as a human rights activist, or an expert of the OSCE. We have already mentioned him in previous articles.