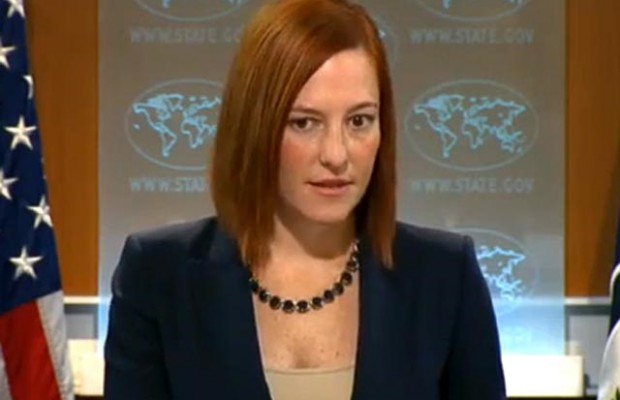 The same day, dozens of media services spread the information that Psaki doesn’t know facts that are otherwise common knowledge, as evidenced by her reference to Yanukovych’s “voluntary resignation.”

Let’s check the original video of the briefing (view from 45:46 min.)

It is possible to examine the transcript of a 51-minutes long video on the official site of U.S. Department of State.

We see that she in fact stated that he “left of his own accord.” (Significantly, she actually stressed the word “left” during the briefing.) “Resigned” is therefore a serious mistranslation by the First Channel. What she was clearly expressing was the fact that Yanukovych left (departed from) Ukraine on his own volition. And this fact is also supported by both Yanukovych himself and by RF President Vladimir Putin.

On February 28, 2014, in Rostov-on-Don during his first press conference, Yanukovych said: “I didn’t run anywhere. I moved from Kiev to the city of Kharkiv…I was not alone and never escaped. We went to meet with activists in Kharkiv… I came to a decision to go to Lugansk. We took off by two helicopters… Pilots made the decision to land them in Donetsk. Here is the situation that actually started my movement from Ukraine. I drove along the roads and in the end we moved to the Crimea.”

In late October, 2014, at a meeting with the Valdai International Discussion Club in Sochi, Putin also described Yanukovych’s move out of Ukraine: “He said, ‘Yes, of course, I understand… I left and gave the command to withdraw all security forces from Kiev.’ Strange man… Yanukovych called and said that he would like to meet me, to talk things over, to discuss the situation. I told him: ‘You are welcome!’ Finally we agreed to meet in Rostov because it is closer and he didn’t want to come very far. He explained it like this. I was ready to take off for Rostov… I am not going to hide it, we helped him to move to the Crimea, and he stayed there even for a few days. Yes, I will say frankly, he asked that we take him away and bring him to Russia, and we did…That’s all.”