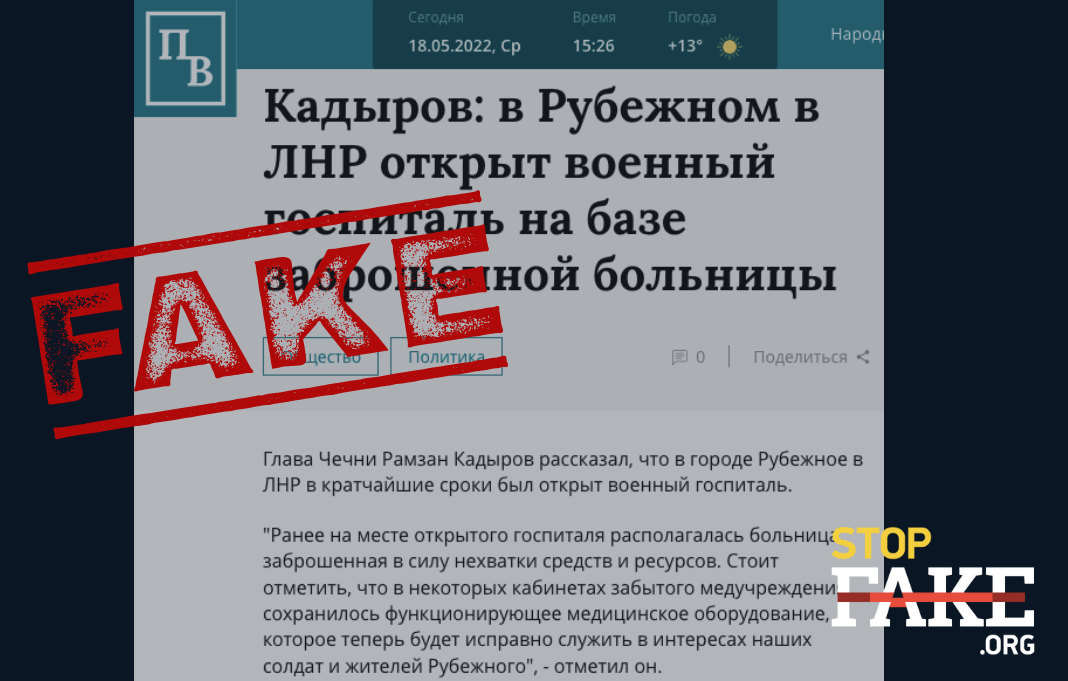 The Rubizhne Central City Hospital Infectious Diseases Department was restored back in 2017 with funds from the United Nations Development Program and the Government of Japan. According to Serhiy Haidai, the head of the Luhansk Regional Military Administration, before the war, the infectious diseases department of the city hospital in Rubizhne had state of the art modern equipment and was considered one of the best in Ukraine.

Russian media are disseminating fake stories claiming that the hospital in Rubizhne, “abandoned due to lack of funds and resources,” was supposedly refurbished thanks to Ramzan Kadyrov’s mother’s fund as a military hospital for Russian soldiers and residents of the city. Chechen chief Ramzan Kadyrov’s Telegram channel features a news story about this alleged renovation and features a tour of the “renovated” hospital. In the video, fighters from Chechnya claim that before they arrived in the city there was “not a single institution that could provide specialized assistance.” The story also claims that the hospital, and Rubizhne civilians, are currently being fully supported by the Kadyrov Foundation.

Ramzan Kadyrov’s mother’s fund did not pay for any hospital refurbishment in Rubizhne.

In the first second of the propaganda video disseminated by Russian media, one can see a sign on a building. The sign reads Rubizhne Central City Hospital Infectious Diseases Department. The hospital’s address is 19 Studentska Street. The plate also reads that the hospital building was renovated with funds from the United Nations Development Program and from the Government of Japan. In an interview with the Ukrainian 24 television channel. Serhiy Haidai, the head of the Luhansk Regional Military Administration confirmed that the hospital had been renovated before the start of Russia’s war against Ukraine, which began on February 24.

The claim that this hospital building was “abandoned” is not true. Back in 2015, the former Head of the Luhansk Regional State Administration, Georgy Tuka, reported that the Japanese government, as part of a program responding to the humanitarian crisis in the Donetsk and Luhansk regions, allocated $180,000 to repair the Central City Hospital in Rubizhne. In 2016, the Luhansk Regional Administration reported that UN Development Program allocated an additional $130,000 under the Restoration and Reconstruction of the World project to modernize the laboratory and infectious diseases department of the Rubizhne Central City Hospital. There is plenty of proof showing that theRussian Federation and its aggressive actions beginning in 2014 created that humanitarian crisis in Donbas.

Renovated, refurbished and restored by the UN together with the government of Japan, the Rubizhne Central Hospital Infectious Diseases Department officially opened in 2017.The UNDP website says that water, electricity, heating and ventilation were restored in the building, the roof, windows and doors were replaced.

There are plenty of videos out on the web of the official opening of the refurbished hospital as well as many articles in the local media. From these videos it is clear that this building has not changed much since 2017, both inside and out.

In an interview with Channel 24 television, Serhiy Haidai said that before the war, these infectious diseases department of the city hospital in Rubizhne had modern equipment and was considered one of the best in Ukraine. “In addition to state support, many international organizations helped improve our infectious diseases department over the past years,” the Head of the Luhansk Regional Administration writes on his official Telegram channel. The Rubizhne City Council website and its official pages on social media contain many references additional about increased staffing of this hospital.

Serhiy Haidai also posted many photographs on his Telegram channel of the interior of the hospital, including new equipment and renovated interiors, all taken before the Russian occupation, therefore Russian claims that the hospital was abandoned are pure propagandist fiction.

In the Russian propaganda story one can see cabinets stuffed with medicines in Ukrainian packaging, medicines that were highly unlikely to have been purchased by Ramzan Kadyrov’s mother’s fund. Serhiy Haidai points out that before the occupation, this hospital not only had expensive medical equipment, but also large stocks of foreign medicines, which also appear on the video.

While Russian propagandists are spreading disinformation that the hospital just opened thanks to Kadyrov’s mother, the Russian military is looting the equipment from the hospital and transporting it to the territory of Russia, Serhiy Haidai said.