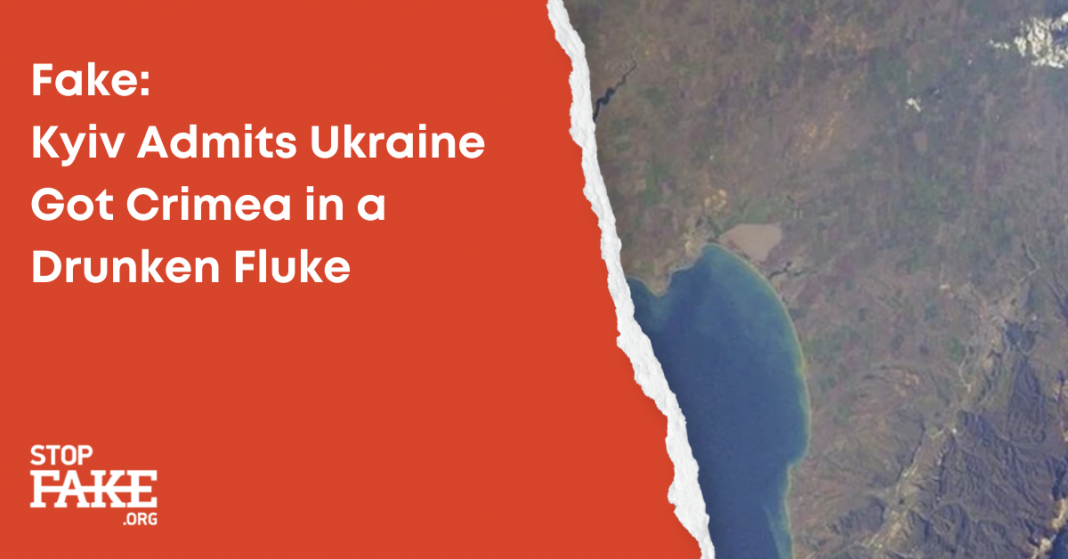 That Soviet Premier Nikita Khrushchev drunkenly gave Crimea to Ukraine in 1954 is one of the most prevalent Russian propaganda narratives being peddled by the Kremlin since 2014. Recently it has reappeared in several publications, albeit with a new twist, alleging that Ukraine has admitted that after the collapse of the USSR in 1991 Ukraine got Crimea through a drunken sleight of the hand, as Crimeans had no right to vote after the fall of the USSR and the fate of the peninsula was completely in the hands of the Ukrainian administration.

NewsFront, Politnavigator and the mornarchist-orthodox site Tsargrad all featured versions of this latest fake narrative.

No one in the Ukrainian government has ever said anything about Ukraine receiving Crimea through some drunken fluke because that is simply untrue. The so-called Ukrainian government Russian media refer to is one Ivan Yermakov, the former chairman of the Sevastopol city administration. Yermakov became infamous for his pro-Russian views and rhetoric. In 2014 when Russia occupied Crimea Yermakov supported the annexation. In 1917 and 2020 he ran for mayor of Sevastopol. Yermakov does not represent any Ukrainian administration and has nothing to do with Ukraine’s current administration.

In reality history shows us otherwise, says Hromenko. Khrushchev did not rule unilaterally in 1954 and he could not have given Crimea to Ukraine single-handedly. That decision was taken collectively by all of the Soviet Union’s governing bodies. The law on transferring Crimea from the Russian Federation to the Ukrainian Soviet Socialist Republic is signed by the chairman of the Supreme Soviet Kliment Voroshylov and the secretary of the Presidium Nikolai Pegov.

“There was no one man rule by Khrushchev in 1954. If we look at who signed the documents transferring Crimea we see all the key players, Molotov, Voroshylov and many others. To attribute the handover of the peninsula to Khrushchev alone is to create a psychological distortion, a kind of cognitive effect “ Hromenko said.

The same goes for Khrushchev’s alleged drunkenness. According to Hromenko this myth arose as a result of Khrushchev’s extravagant behavior, such as banging his shoe on a desk at the UN. If he behaved this way he must be drinking, goes the reasoning. There is no proof that Khrushchev was a chronic alcoholic. This is just another myth that gets repeated again and again and finally Putin quotes it and the myth takes on a perverted political form, Hromenko explains.

As for the claim that Crimeans had no voice in deciding their future after the Soviet Union fell apart, this is another complete lie. In 1991 Crimeans voted in three polls to decide the future of the peninsula.

First, on January 21, 1991 Crimeans voted in a referendum to renew the peninsula’s  utonomy. Then on March 17 they voted to remain in a new, reconstituted USSR. That poll could not be realized as the Soviet Union fell apart, And finally, on December 1, 1991 Crimeans voted in a referendum on Ukrainian independence, with the majority supporting independence.

“Ukraine has repeatedly asked the Crimean people about how they see the future of the peninsula, and to say that the Crimean people were not asked and were simply handed over like a sack of potatoes, that they went to bed in one country and woke up in another is not a myth, but an outright lie, that is being spread in the hope that people won’t even bother reading Wikipedia” Hromenko affirmed.