Responding to StopFake’s inquiry about these Russian media claims, Ukrainian UN mission spokesman Oleh Nikolenko said the information was completely false. “This is just another Russian fake aimed at not only discrediting Ukraine but compromising the UN as well. Ukraine has never had any involvement in the North Korean missile program” Nikolenko said.

Mr. Nikolenko cast doubt on the professional integrity of Dmitry Kiku, a Russian national who claims that Ukraine admitted it manufactured parts that are in North Korean engines.

Dmitry Kiku, a Russian national, really is a UN expert on North Korea sanctions and his name appears on the latest UN Panel of Experts report on the North Korean missile program. There is absolutely nothing in the report about Ukraine’s admission of providing North Korea with engine parts. Paragraphs 14 through 16 of this report clearly state that Ukraine’s capacity to produce such engines was dismantled in 1994 and that Kyiv had never entered into any talks or deals with North Korea involving engine parts.

Ukraine’s UN mission pointed out the fallacy of Dmitry Kiku’s claims in its official Twitter feed, called the RT story based on his misrepresentation a fake and called on the public to read the UN Panel of experts report, particularly paragraphs 14 through 16. 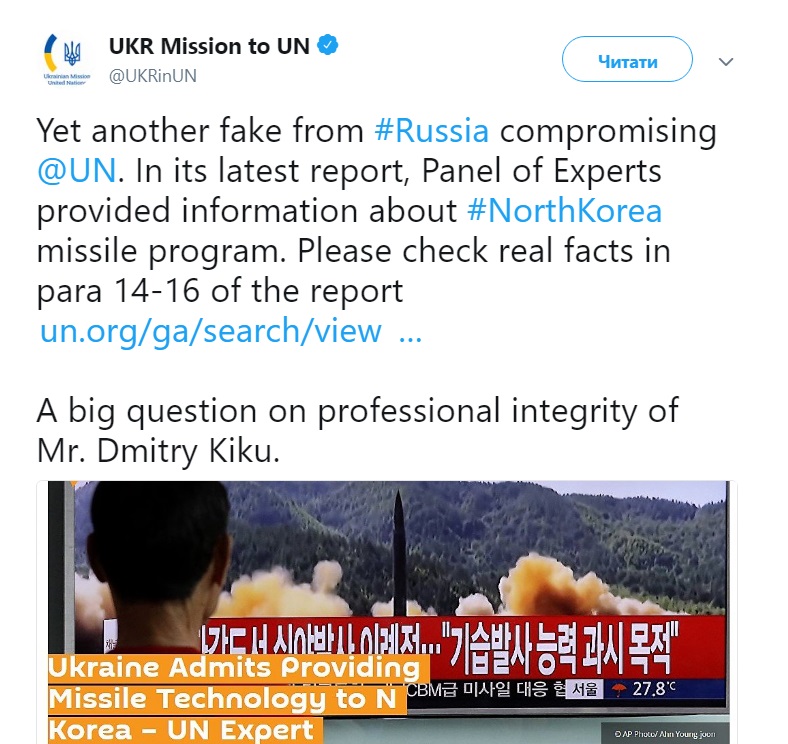 In August the New York Times reported that rocket engines powering North Korean missiles could have come from a Ukrainian factory with ties to Russia’s missile program via the black market. Ukrainian President Petro Poroshenko ordered an investigation into the matter, which showed no Ukrainian engine parts fell into North Korean hands.