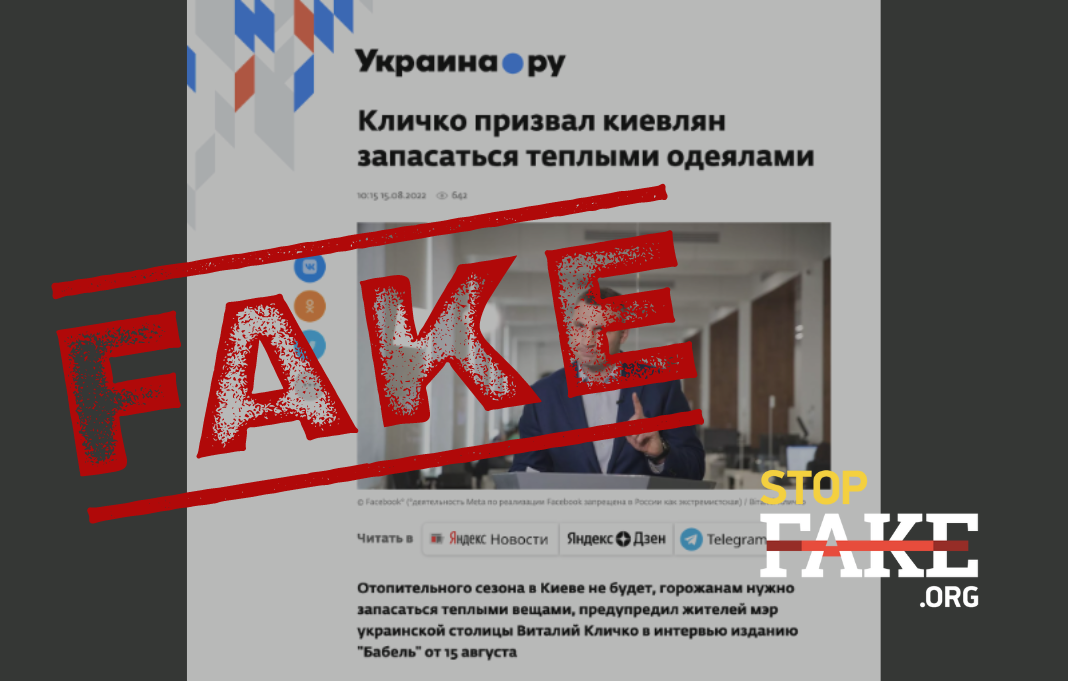 Kyiv Mayor Vitaliy Klychko said nothing about canceling the heating season in Kyiv. Klychko said there is enough gas to keep the capital’s population warm during winter, but because of Russia’s war against Ukraine, Kyiv is preparing for possible terrorist attacks on the capital’s heating stations.

Just as they have been doing for many years now, before cold weather sets in, Russian media begin disseminating their classic narrative about Ukraine “freezing” in winter. This time pro-Kremlin media reported that Kyiv mayor Vitaliy Klychko announced that centralized home heating in the capital will be “canceled” and called on Kyivans to “buy warm things.” Among the reasons for this alleged cancellation Russian mass media cited the “energy crisis provoked by sanctions against Russia”.

Mayor Vitaliy Klychko did not make any statements about the heating season being “disrupted” or “canceled” in the capital. Russian media manipulated his words about the city preparing for cold weather in the midst of Russia’s war against Ukraine. Klychko spoke about possible Russian terrorist attacks against the city’s heating and electrical infrastructure, and not about the “energy crisis caused by sanctions against Russia.”

In an interview with the Babel news site, Klychko talked about the upcoming heating season in Kyiv and called on residents to prepare for possible heat and electricity blackouts. He said  that the government and city authorities do not rule out the possibility of Russian terrorist acts and attacks on gas pumping stations. Kyiv is preparing for this, Klychko assured, by purchasing mobile boiler houses, generators and fuel. Klychko also urged Kyiv citizens to stock up on warm clothes and blankets in order to keep warm in unpredictable situations. Klychko did not make any statements regarding sanctions.

Kyiv Deputy Mayor Petro Panteleev explained that the messages from Kyiv city authorities should be perceived as a call for reasonable energy consumption and energy saving. Panteleev assured that, under martial law and limited funds, Kyiv was still able to carry out the technical minimum of preparation for the heating season.

StopFake has repeatedly exposed Russian fakes about “Ukraine freezing without Russian gas” in stories such as “Manipulation: The Mayor of Lviv urged city residents to stock up on firewood for the winter”.