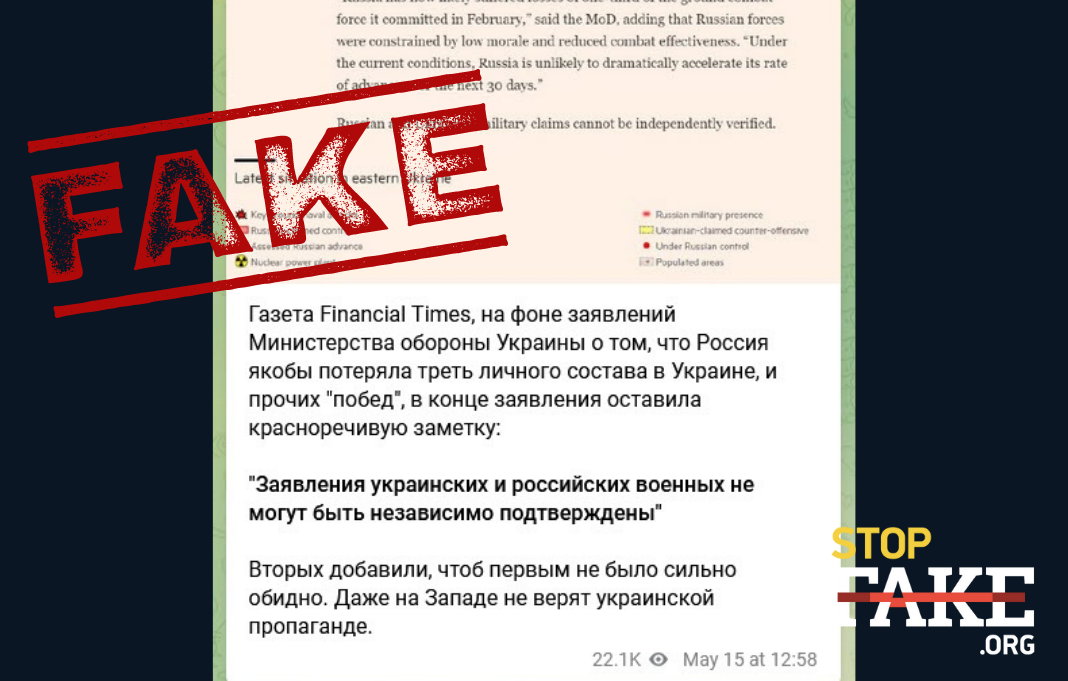 Ukraine is not the only country saying that Russia has incurred significant losses in its war against Ukraine, the British Ministry of Defense has also said the same thing. Russian allegations that Ukraine is “producing propaganda that even the West does not believe” are simply lies. The heavy losses of the Russian army are becoming increasingly obvious not only to Ukrainians, but also to foreign analysts.

Social media accounts are circulating claims that Ukraine is lying when it says that Russia has already lost a third of its military force in its war against Ukraine. These social media users allege that Ukraine’s Defense Ministry is producing “propaganda which even the West does not believe”. To confirm their claims of alleged Ukrainian “propaganda,” they cite the British newspaper Financial Times, which carries a footnote in its publications about the war in Ukraine: “Russian and Ukrainian military claims cannot be independently confirmed.”

In fact, it is not only the Ukrainian Ministry of Defense that has said that Russia has already lost a third of its military personnel since the start of the war in Ukraine, but British Ministry of Defense has also said this as well. Therefore, this is not “Ukrainian propaganda, which even the West does not believe, but the assertion of a completely “Western” structure. It is British Defense Ministry statements that the Financial Times quotes.

The news about Russian losses appeared in the foreign media on 15 May. The British Ministry of Defense also emphasizes that the Russian military campaign in eastern Ukraine lost momentum and over the past month has not been able to achieve significant success. Russian forces are increasingly constrained by reduced capacity, continued low morale and declining combat capability, according to a UK Department of Defense report. “Many of these capabilities cannot be quickly replaced or restored and are likely to continue to hinder Russian action in Ukraine. Under the current conditions, Russia is unlikely to sharply accelerate the pace of its advancement in the next 30 days,” the ministry concluded.

In addition to lying about the alleged “Ukrainian propaganda” statement, pro-Russian social media accounts also manipulate a disclaimer in the Financial Times, that Ukrainian and Russian military claims about losses cannot be independently verified.” The Russians were added so that the Ukrainians would not be too offended… Even the West doesn’t believe Ukrainian propaganda, – pro Kremlin social media accounts declare.

Clearly western journalists can’t verify the number of losses incurred either by Russia or Ukraine, and such disclaimers are standard operating procedure in journalism. Ukraine and Russia are parties to the conflict and foreign journalists apriori cast doubt on the claims of both sides about the progress of the war and the number of incurred casualties.  Russia’s heavy losses, however, do not elicit any doubts either in Western or Ukrainian media. According to the Ukrainian General Staff, to date the Russian Federation has lost about 27,900 soldiers in its war against Ukraine.