Russian propagandist television channel Tsargrad has published a fake on its web site claiming that Ukraine is refusing to clear up mines in Donbas and therefore Finland will have to it. The story claims that after Kyiv refused to finance the clearing of mines left by Ukrainian soldiers, Finland has taken on the task.

Russian media have previously claimed that soldiers and children are dying because of Ukrainian mines. None of these allegations have ever been documented or proven, quite the contrary, during mine clearing operations in Donbas, aside from dangerous improvised explosive devices, Ukrainian sappers have come across Okhota mines, explosives which are only used by the Russian army.

In 2005 Ukraine became a signatory to the Ottawa Convention or the Anti-Personnel Mine Ban Treaty and since 2012 has continued to dispose of prohibited explosive devices.

Ukraine’s military tracks the installation of all explosive devices, their location is documented and recorded on a special map.  In order to reduce the risk of accidents, in 2018 Ukraine’s Defense Ministry published a map of territories littered with mines and other explosive war remnants.

Ukraine never refused to clear mines in the Donbas war zone. Mine clearance is conducted simultaneously by Ukraine’s Armed Forces, the State Special Transport Service and the Emergency Situation Service. In addition, since 2016 several international organizations have been helping with mine clearance in Ukraine, the Halo Trust, the Danish Demining Group, and the Swiss Foundation for Mine Action. 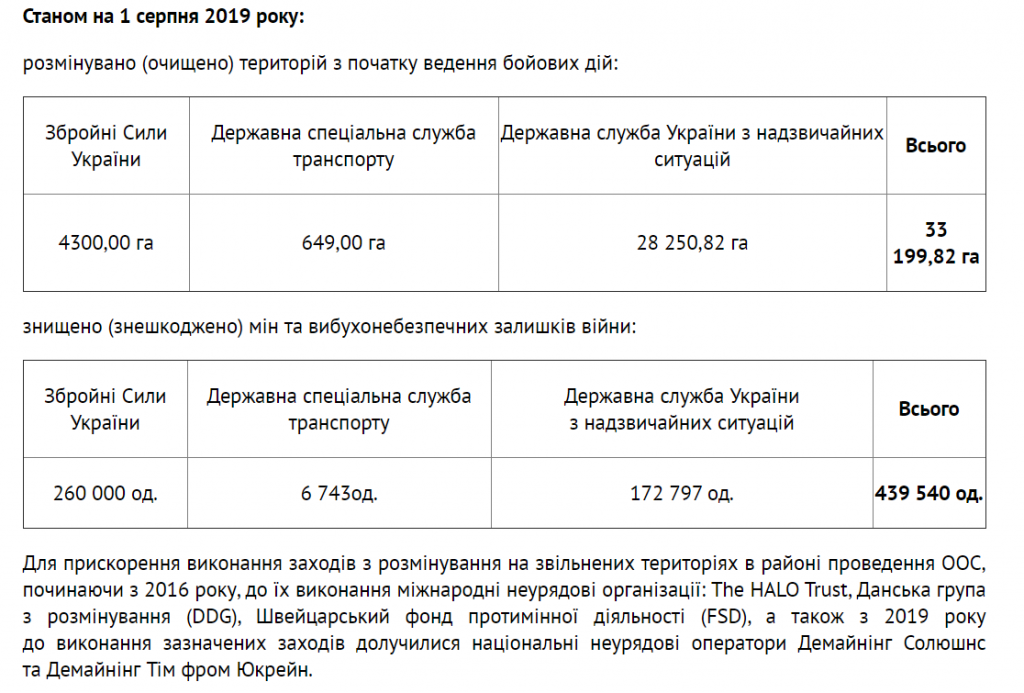 In January 2019 Ukraine’s law on mine safety and clearance came into force. The law states that anti-mine and clearance programs are financed through the state budget along with donor funds.

Finland’s Foreign Ministry has confirmed that they are ready to allocate 600,000 euros for mine clearing in Donbas. Mines continue to be a problem in the area, hampering agriculture and construction in many areas. In addition to Finland, over the last year Great Britain, Germany, NATO and others have provided financial assistance for mine clearing programs in Ukraine.

The 16 thousand square kilometer theater of war in the Donbas is one of the world’s most mine and explosive littered places. Since 2014 the Halo Trust has recorded more than two thousand accidents related to land mines and other explosives in Donbas.