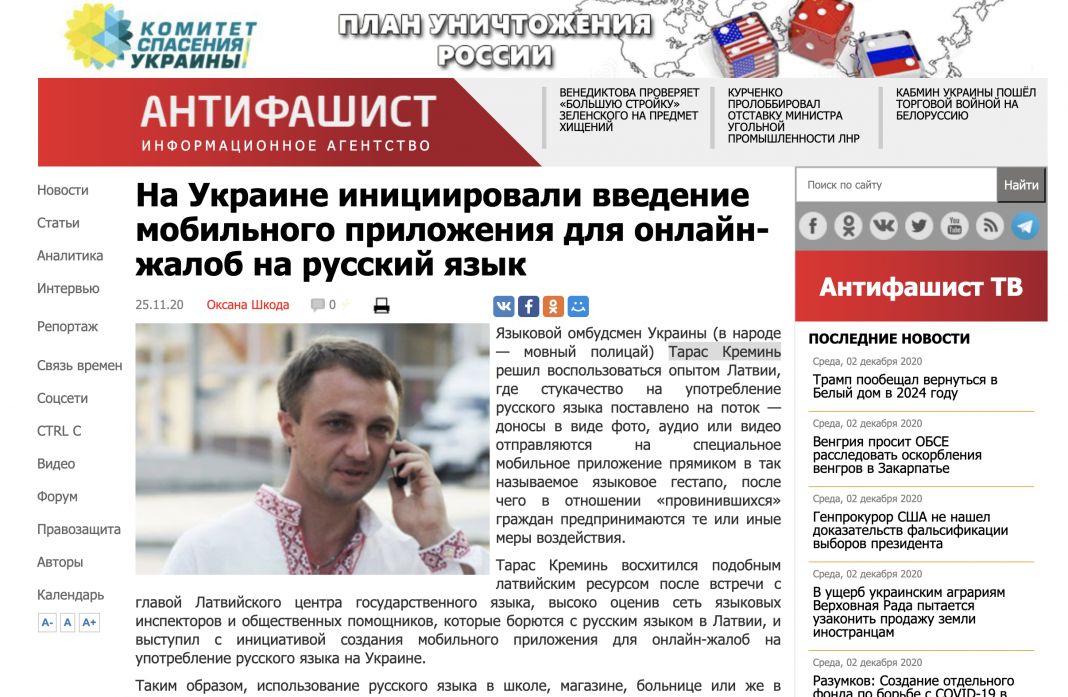 Snitching, denunciations, language Gestapo, these are the epithets several Russian publications used in their stories about Ukraine learning from Latvia’s experience in establishing and solidifying Latvian as that country’s state language. To this end the Commissioner for the Protection of the State Language Taras Kremin advocates the development of a mobile app through which Ukrainians can leave complaints when they note violations of the law on use of Ukrainian in public places. Russian media immediately raised the alarm about “oppression of Russian speakers”, the “destruction of the Russian language” in Ukraine and accused Kremin of returning Stalinist terror to Ukraine.

Kremin held an on-line conference with his Latvian counterpart Maris Baltins at the end of November focusing on Latvia’s experience in implementing language legislation as a possible model for Ukraine. In 2018 Latvia enacted laws for the gradual switch to Latvian language teaching in schools, a move that angered Latvia’s Russian minority as well as Moscow.

Kremin proposed the creation of an app that would allow posting messages in cases where Ukrainian was not adhered to in public places, or conversely, provide an opportunity to thank all the public institutions who were using Ukrainian. At no time during the Kremin Baltins online meeting was there any mention of eradicating the Russian language, establishing a linguistic dictatorship or any other extreme measures allegedly directed against Russian speakers.

Latvia has been using an app such as the one Kremin described for several years. The Language Friend app does not allow anonymous reports, identity confirmation is required in order to leave comments. Complaints or compliments must be accompanied by evidence, a photo or a video. These comments are automatically sent to the Latvian State Language Center where staff decides on the proper response.

The application provides an opportunity for the public to participate in the activities of the State Language Center by conveniently and quickly sending a message about a possible violation of the state language or, on the contrary, praising a Latvian-friendly company, press or website.

Neither the Language Friend app nor the Ukrainian language law are in any way creating a Stalinist terror environment, as Russian media claim. Ukraine’s language law regulates the use of Ukrainian in all spheres of public life; it does not dictate the language of personal communication or religious worship. There is no criminal liability for violations of certain sections of the law. Claims to that effect are another Russian media myth. Non-compliance does carry administrative fines, but those fines will begin to be enforced only in July 2022.