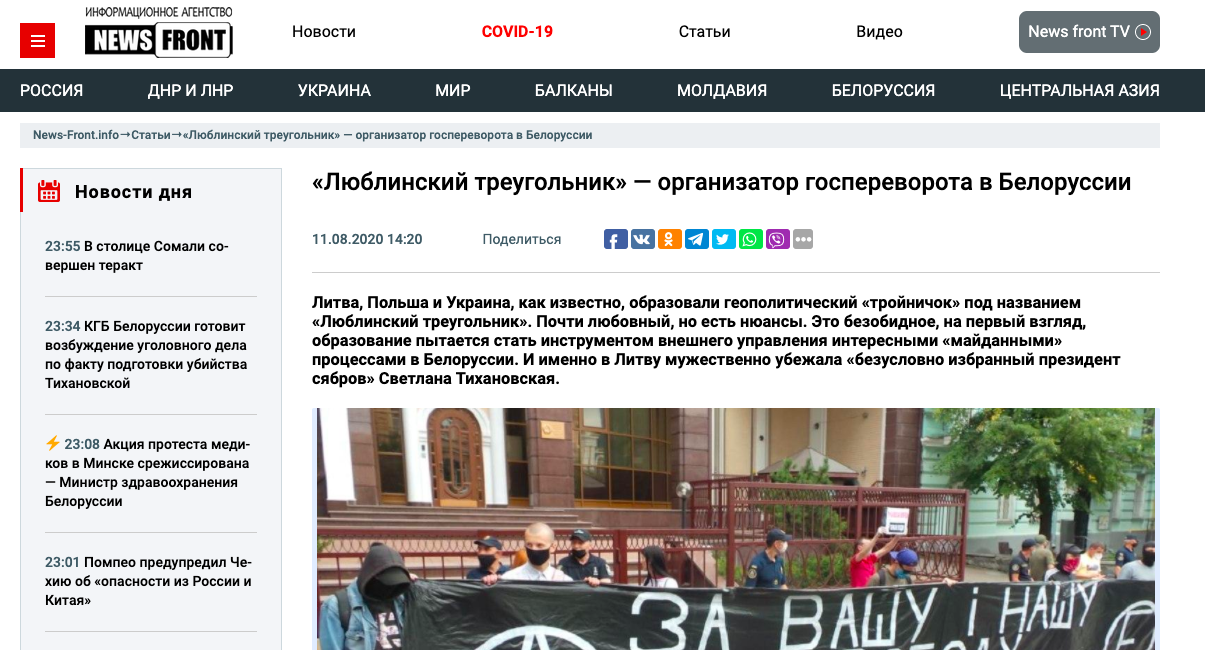 Russian media are busy broadcasting disinformation about the mass protests that began in Belarus on August 9 in the aftermath of the presidential elections that Alexander Lukashenko claims he won.  As the protests spread throughout the country, pro-Kremlin media in particular began publishing stories blaming the “Lublin triangle” – Lithuania, Poland and Ukraine of organizing a coup in Belarus. This new three way alliance according to the Russian media narrative was created specifically to tear Belarus away from Russia as far as possible. NewsFront and Politnavigator claim that these three countries are Russophobic and are trying to steer Maidan type processes in Belarus, referring to Ukraine’s 2014 Maidan protests.

The Lublin Triangle is a three way political union including Lithuania, Poland and Ukraine which was created on July 28 of this year. The Russophobia that pro-Kremlin media accuse the group of lies in the fact that the Foreign Ministers’ Joint Declaration from the July 28 meeting calls on Russia to cease its aggression against Ukraine, end the annexation of Crimea and withdraw its troops from eastern Donbas. The main area of cooperation between the three countries is developing trade, investment and infrastructure projects and not state coups or civil unrest as NewsFront and Politnavigator allege.

“A specific sector of our cooperation is trade, investment and infrastructure projects. Three countries that have access to three seas, 83 million people, almost $770 billion in collective GDP and 982 square kilometers of territory have enormous economic and political potential. We are also already united by an assembly of three parliaments and a common military unit, ” emphasized Ukraine’s Foreign Minister Dmytro Kuleba in an interview with Ukraine’s Censor.Net web site.

There was never any attempt on the part of the Lublin triangle to interfere in the internal affairs of Belarus, quite the contrary, the group offered its assistance in establishing an open dialogue between the Belarusian authorities and the opposition.

“The wellbeing and prosperity of Belarus and its people are important for the whole of Europe and especially for our region. We are all interested in continuing a mutually beneficial dialogue, as well as cooperation based on democratic values and focused on creating conditions for a common stable future” the Lublin Triangle ministers wrote in a statement. Representatives of the tripartite group also called on Belarusian authorities to stop the violence against protesters and release all detained activists.

Neither the Lublin Triangle, nor the European Union nor the United States have played any role in the Belarusian protests. Belarusians took to the streets in protest after Lukashenko, who has ruled Belarus for 26 years declared that he had won another “landslide victory” in the August 9 presidential elections.

The protests have continued since August 9. Security forces have violently dispersed the protesters, using rubber bullets, tear gas, truncheons and tasers. Thousands were arrested and beaten. On election day the center of the capital Minsk was blocked by security forces, the internet was down and communications were jammed. International observers were not allowed to monitor the elections, voters’ access to polling stations was restricted, independent journalists and activists were massively detained.

The EU and the US have called on Lukashenko to stop the violence against his own citizens and publish the real results of the presidential elections.