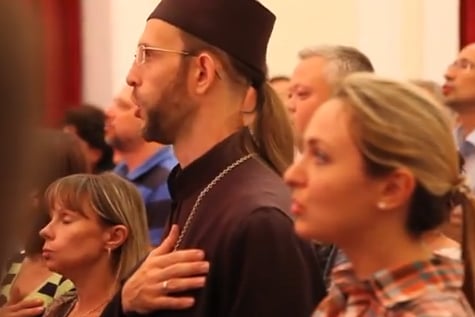 News about Mariupol citizens crying “Russia!” during the visit of the President Poroshenko is spreading across social networks and news websites.

A short video is presented as the evidence.

Since it is pretty hard to hear the word “Russia” in it, the fake forgers started to come up with their own versions. For example, the website of Russian Ministry of Defence Zvezda wrote, that in such way pro-Russian citizens tried to outcry the cries “Ukraine!”, and then everyone started shouting “Lustration!”

Others decided that the people shouted “Here is Russia”, “Russia is a Friend” or “South is Russia”.

In fact, the people cried “Lustration” in Ukrainian, which is pronounced softer compared to the Russian equivalent.

Besides, these cries were heard when Poroshenko was leaving, not when he came out to meet the people. It is further proved by the Russian news outlet Kommersant, which also claims people shouted “Lustration”.

Also, it’s hardly possible that the people who several minutes ago sang the anthem of Ukraine along with the President would shout “Russia”: