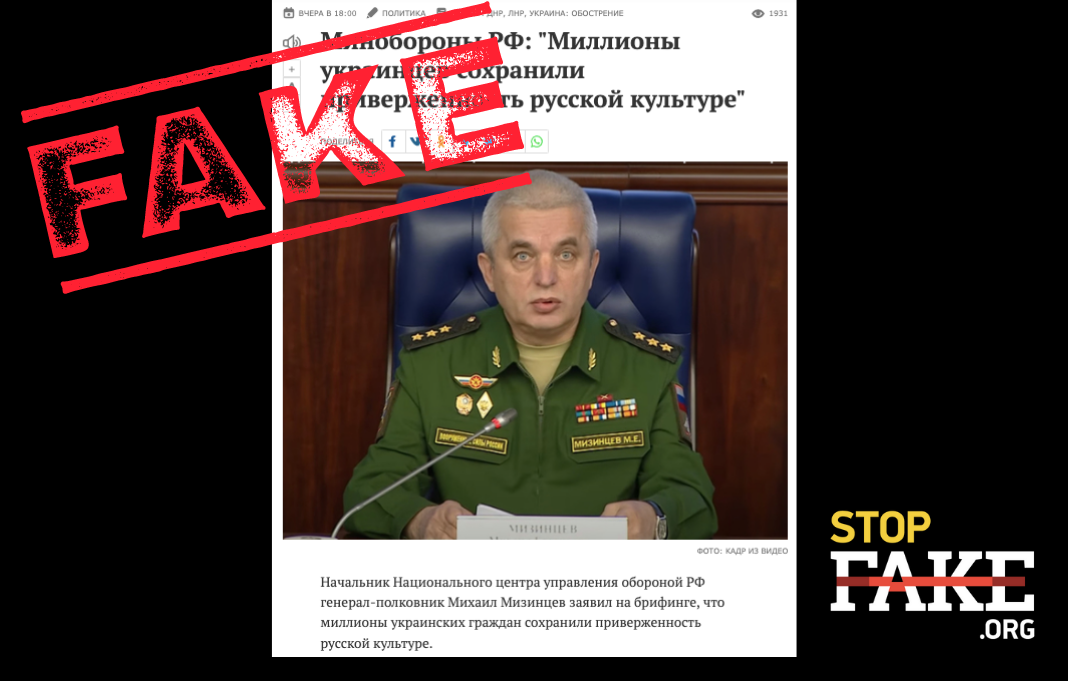 Russia’s Defense Ministry claims 15 million Ukrainians have strong ties to Russia. The Ministry does not explain where this figure comes from. Meanwhile Ukrainian polls show that the goal of Russia’s invasion of Ukraine is the complete annihilation of the Ukrainian people.

As Russia’s war against Ukraine rages on for a fourth week, the Russian propaganda machine shows no signs of slowing down, quite the opposite, they are churning out fakes and disinformation at an increased pace. One of the latest pieces of disinformation put out by the Russian media was concocted by the Russian Defense Ministry, who claim that most Ukrainians have always been in favor of good relations with Russia and more than 15 million Ukrainians maintain strong ties with the Russian Federation. The story also includes a list of regions where “the desire for friendship with and assistance from the Russian Federation” are allegedly most sought after. The Ministry, of course, does not say how this figure was arrived at or what criteria was used to determine this high love of Russia on the part of Ukrainians

According to national polls, most Ukrainians believe that the purpose of Russia’s invasion of Ukraine is the complete destruction of the Ukrainian people.

Mikhail Mizinstev, the chairman of the Russian Federation National Defense Management Center told Russian Interfax that “in the midst of the humanitarian crisis, a large part of the population held by nationalists in Ukrainian cities and used by them as ‘human shields’ are looking from protection from Russia and not the West, this is confirmed by millions of citizens seeking help in evacuating to the Russian side”.

Neither Mizintsev nor the Russian Defense Ministry bothered explaining where they got these “statistics”. If we look at official open sources and the results of recent Ukrainian polls, the picture is completely different. A poll conducted by the Kyiv International Institute of Sociology (KIIS) in February of this year, the percentage of Ukrainians who have a positive attitude towards Russia is declining, from 39% in November 2021 to 34% in February 2022. It is worth noting that the February poll was conducted prior to Russia’s full-scale invasion of Ukraine.

Responding to the question “What kind of relations do you want to see between Ukraine and Russia?” the vast majority of respondents – from 95% in the West and 86% in the East – said that Ukraine and Russia should be independent states (February 2022 data).

Another poll already conducted during the full-scale Russian war (Rating polling group, March 12-13, 1,200 respondents) show that 56% of Ukrainians believe the main goal of Russia’s invasion is the complete destruction of the Ukrainian people, this view dominates in all parts of the country. 49% believe that Russia wants to occupy Ukraine and make it a part of Russia. Only 2% believe that the reason for the Russian invasion is to protect the Russian speaking population. Furthermore, 86% of Ukrainians believe that Ukraine should not give up Crimea or the Donbas but should use all opportunities to return these occupied territories. Again, this view prevails in all regions of Ukraine.

The claim that during this war Ukrainians turn more often to Russia for help is simply a lie. According to the UN High Commissioner for Refugees (UNHCR), as of March 14, 2022, some 3 million Ukrainians fled their country, of which 60.7% left for Poland. The flow of refugees to Russia is only some 142,99, to Belarus a mere 1,230.

Earlier this month StopFake debunked a fake claiming that 2.5 million Ukrainians are asking to be evacuated to Russia.