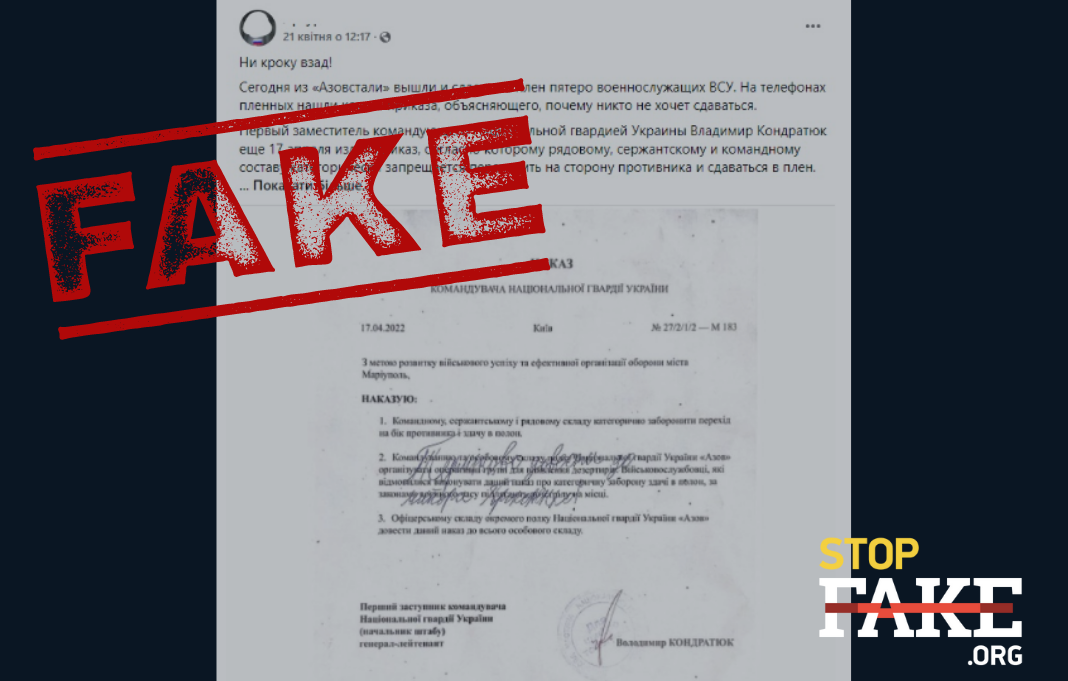 An “order” being circulated online is a fake. Several errors in the document’s wording and style point to the fact that it is not genuine. Desertion as well as voluntary surrender are punishable offense as set forth in Ukraine’s Criminal code. According to Criminal Code Article 430, voluntary surrender due to cowardice is punishable by imprisonment up to seven-ten years.

An “order” allegedly issued by the commander of Ukraine’s National Guard forbidding personnel to surrender or go over to the enemy under punishment of execution is being circulated online.

“According to the rules of war, servicemen who refuse to carry out the order forbidding surrender, are subject to execution” netizens quote the alleged “order”.

Allegedly copies of this “order” were found on the cell phones of Ukrainian servicemen who are now prisoners of war held by Russian forces. Russian propagandists write that his explains why Ukrainian servicemen, in particular the fighters of the Azov regiment, refuse to surrender.

At the same time Russian media are also claiming that “the Ukrainian military are losing their fighting spirit” and voluntarily surrendering to the Russians. Seemingly a video in which Ukrainian prisoners of war talk about the “respectful attitude” of the Russian military towards them is facilitating these alleged voluntary surrenders.

“This was facilitated not only by the humane attitude of the Russian armed forces but also by the decadent mood in the ranks of the Ukrainian military. The prisoners of war convey the commanders’ orders: whoever tries to surrender will be judged by the full severity of wartime – execution on the spot. Such extreme measures are testimony to the impossibility of raising morale, only direct threats are applied,” writes the AfterShock publication.

Such claims along with the fake “order” disseminated online are simply not true. There are no secret orders to “execute” Ukrainian servicemen who surrender. The punishments for desertion and voluntary surrender are clearly outlined by Ukrainian legislation, in the Ukrainian Criminal Code.

The fact that the document disseminated online is a fake is proven by the inconsistency of the administrative norms as practiced by the Ukrainian Interior Ministry. The National Guard is part of the Ukrainian Ministry of Internal Affairs.

According to the procedures for preparing and processing documents in the Interior Ministry of Ukraine, an order must have a title, it must contain a short summary and it must clearly answer the question “what”. The document in question does not have a title. Interior Ministry documents follow a business style, they are neutral in tone, devoid of insults, emotionality, and personal characteristics. The alleged “order” that is the basis of this fake, does not follow any of these rules. It contains formulations that are not legal terms – laws or war, for example. The document is also filled with punctuation errors and there are no paragraph indentations. The “order of the commander of the National Guard of Ukraine” despite having such a heading, is signed not by the commander, but by his deputy. The way the name of the deputy is written on the order also does not comply with the usual practices of Ukrainian administrative rules, where all official signatures use only initials and the surname of the person signing.

It should also be noted that in official Ukrainian correspondence and documentation, the dates and registration numbers are usually written by hand and not printed in advance. Official rules dictate that the documents are dated by the officials who sign or approve them.

Below is a comparison of the “order” circulated online with a genuine order issued by the commander of the Ukrainian National Guard.

The very existence of such an “order” is absurd, because before a real order is signed by the person in charge, the document is checked for compliance with Ukrainian legislation — and this “document” directly contradicts Ukrainian laws.

Committing a crime during wartime is an aggravating circumstance, and liability under such circumstances is stricter than in peacetime. However, in Ukraine there are no crimes that are punishable by death even during wartime. The death penalty was abolished in Ukraine more than 20 years ago, and today the highest penalty is life imprisonment.

There are several crimes in Ukraine’s Criminal Code related to military duty, in particular desertion, departure from a military unit or place of service without leave, evasion of military service through self-harm, voluntary surrender, etc. According to Article 430 of the Criminal Code, cowardice and voluntary surrender due to cowardice are punishable by 7-10 years’ imprisonment.

Desertion and unauthorized abandonment of a military unit or place of service during wartime are also punishable by imprisonment. The term depends on the aggravating circumstances but does not exceed twelve years.

Russian propagandist claims that Azov Regiment fighters do not surrender because they fear being shot by their commanders are absurd. The Azov Regiment has repeatedly declared that Mariupol defenders will never surrender, no matter how many demands the invading Russian army issues. “We have repeatedly said that we will not surrender into captivity. We will fight, the only option we would consider is to leave Mariupol and go to a safe place with our weapons,” one of Azov’s commanders told the BBC.

Earlier StopFake debunked a Russian claim that Ukrainian Defense Ministry officials were selling weapons abroad while the Ukrainian military is dying from a shortage of ammunition.