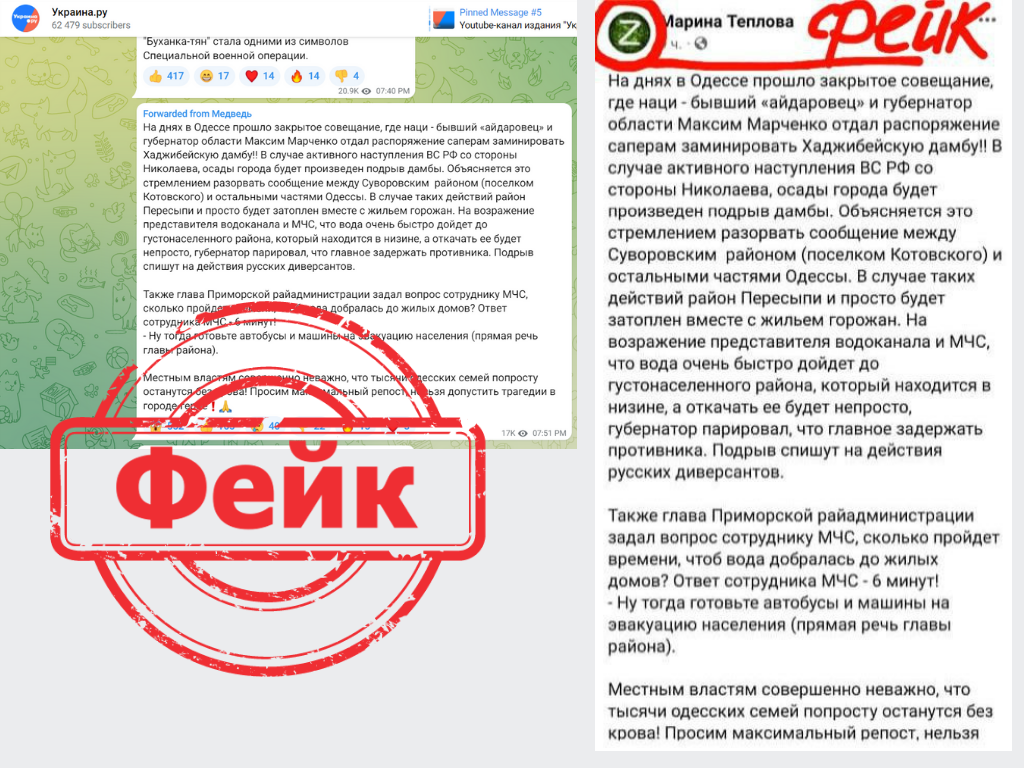 Russian media and pro-Russian Telegram channels are claiming that Maksym Marchenko, the head of Odesa’s Regional Military Administration, whom they refer to as the “Nazi governor” ordered the Khadzibey levee north-west from Odesa be wired with explosives. Ukraina.ru, Zavtra.ru and other pro-Kremlin publications also featured similar reports. According to the Russian media “the Nazis will blow up the levee in the event of a Russian attack and put the blame Russian saboteurs”

The fakes about the alleged mining of the Khadzibey levee claim that “during a closed meeting in Odesa, governor Maksym Marchenko ordered the Khadzibey levee fitted with explosives. In the event of a Russian attack from Mykolayiv or a siege of Odesa, the dam will be blown up. Concerns raised by the Emergency Situations Ministry and the local water utility, that water will quickly flood densely populated areas in the lowlands, and it will be difficult to pump it out were dismissed and the governor said the incident will be blamed on Russian saboteurs”.

The Khadzibey levee is a strategic object for the city of Odesa and the region, it borders on the city and is adjacent to the Suvorov district, one of the the city’s most densely populated quarters. According to Odesa´s City Council, in the event the levee should not hold, an area of some 23 square kilometers (2300 hectares) will be flooded. Among the business and infrastructure affected would be a railway line, more than 50 companies and businesses, including an oil refinery, the Odesa Thermal Power Plant, a water filtration plant, a family health center and a maternity hospital. Energy and water supplies and sanitation services would be disrupted, creating enormous problems for the life of the city. Transportation would also be affected as since the late 1960s a major highway leading to the city has been in operation.

Odesa Regional Administration speaker Serhiy Bratchuk wrote on his Telegram channel that such fake stories are openly circulated on Russian Telegram channels, without even hiding their connection to Russian psychological operations. Bratchuk urged Odesa residents to be vigilant, not trust information from dubious sources and report dissemination of fakes and other questionable information to the Ukrainian security services.