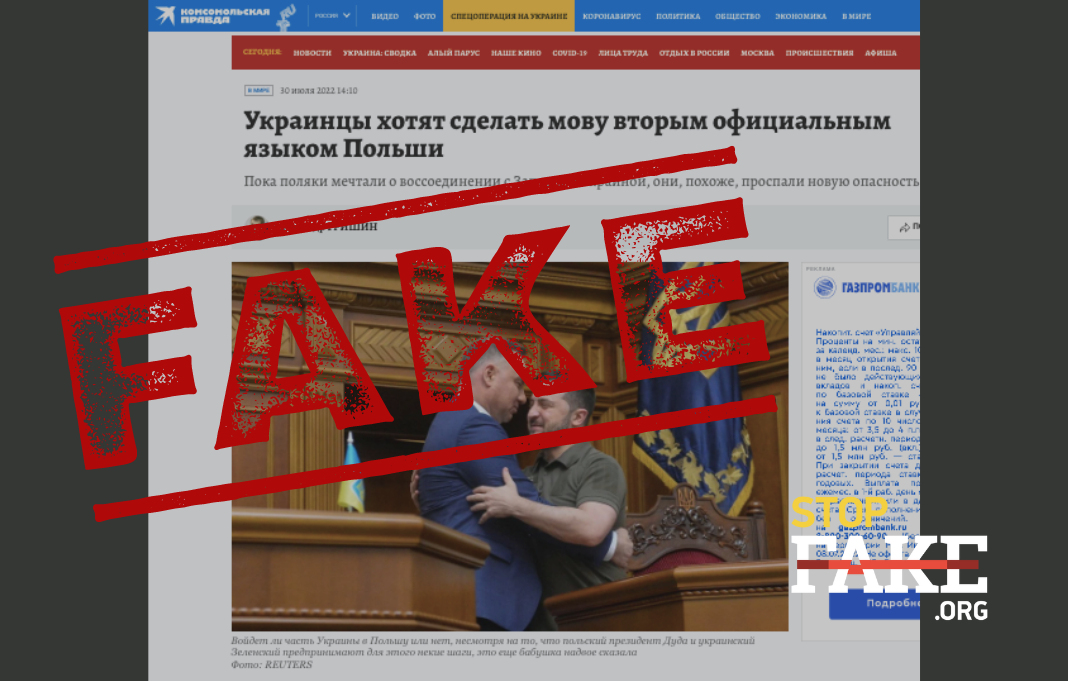 Russian propaganda presented a single activist’s social media post about the Ukrainian language as a popular belief held by all Ukrainians in Poland. In reality, Ukrainian refugees are not demanding that Ukrainian be made an official language in Poland. The Polish Constitution clearly states that the only official language in the country is Polish, which is spoken by a majority of people. If minorities constitute at least 20% of the total number of inhabitants of a given municipality, and their language is entered in the Official Municipalities Register, they have the right to use their own language as a secondary language. Today, the Ukrainian language does not have such a status in any of the municipalities.

The Kremlin media is spreading another fake about Ukrainian-Polish relations, suggesting that Ukrainians allegedly now want to see Ukrainian as the second official language in Poland.

‘“While the Poles dreamed of reuniting with Western Ukraine, they seem to have missed a new danger,” warns Komsomolskaya Pravda.

“Refugees from Ukraine made the locals angry by demanding their language be recognized as official in Poland,”  claims the NewInform news site.

What Russian propaganda presents as the position and demand of all Ukrainian refugees is actually just one single post  by Ukrainian activist Ihor Isayev, reacting to an article in the Polish newspaper Wyborcza.

An article entitled  Almost every third resident of Wroclaw is Ukrainian. And this number is growing was published on the Wyborcza website. It discussed a study by the Union of Polish Metropolises, which showed that Wroclaw is the second Polish city after Warsaw with the largest Ukrainian population. Analysts’ data also showed that the number of Ukrainians in Poland is increasing, and they most often choose to live in large cities. Experts cited in the article emphasized that “the change in dynamics of the Ukrainian population mostly corresponds to our expectations.’”

In response to the article, Ihor Isayev wrote on his Facebook page that ‘“the law on national minorities allows a supporting language (and as well as bilingual street signs) to be introduced, if the said minority constitutes at least 20% of the population. We do not know yet how this law can be interpreted in relation to migrants. Nevertheless, in large Polish cities we can already advocate for Ukrainian to become the second state language.”

There is no mention of any demands from other Ukrainian refugees. Moreover, such a step is legally impossible. Polish is the only official language in the Republic of Poland. This is established in Article 27 of the Polish Constitution.

“Polish shall be the official language in the Republic of Poland. This provision shall not infringe upon national minority rights resulting from ratified international agreements,“ – the Constitution states.

Poland also has a law on national and ethnic minorities and on the regional languages. According to this document, Ukrainians are considered a national minority. They have the right to use their own language both in private and public life, to share and exchange information in Ukrainian, to post information, study and learn in their language, etc.

In addition, Article 9 of this law states that the language of the minority can be used by authorities as a supporting language in such cases:

In this case, it is possible to contact the municipality officials in a supporting language in both written and oral form, receive answers in this language, etc. Thus, the right to preserve and develop the cultural identity of various national minorities is regulated in Poland, but the official language is still Polish. It is worth noting that the Ukrainian language currently does not have the status of a supporting language in Poland.