Last week Ukrainian media reported that the Council of Europe Parliamentary Assembly approved a resolution laying the groundwork for the abolition of political sanctions against Russia.

This latest fake was disseminated by both Ukrainian and Russian media, among them Fakty, UNIAN, Komsomolskaya Pravda, Podrobnosti, Pravda.ru, Yuzhnyi Federalnyi and others. 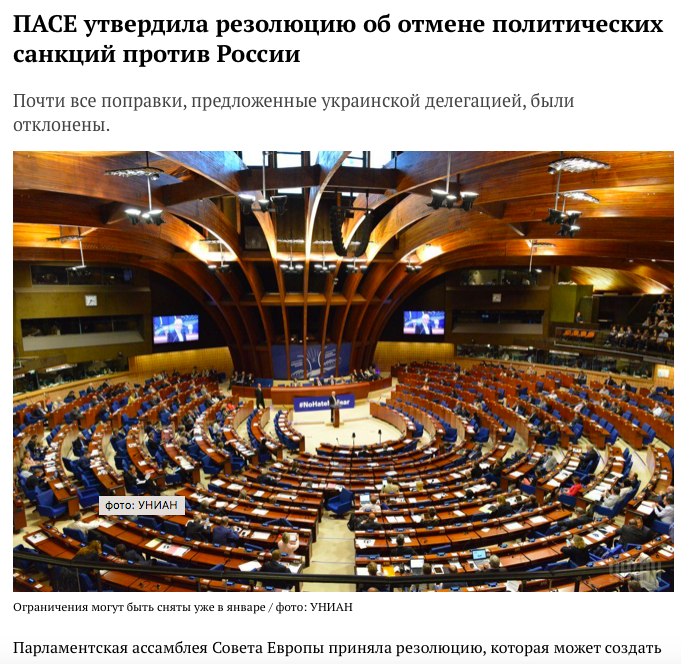 The Council of Europe resolution in question is not about sanctions at all and it most certainly does not lay the groundwork for removing sanctions against Russia which are currently in place.

The resolution in question was about a call for a summit of the Council of Europe, the first for 12 years, in order to examine what the council’s mission should be in a Europe beset by political turmoil – much of it caused by Russia’s aggression and attempts to destabilize democracy.

The Council of Europe has two branches – a Parliamentary Assembly and the Committee of Ministers. The assembly comprises delegations from the parliaments of member countries. Because of its aggression against Ukraine Russia has been suspended from taking part in the assembly since 2014. This is the only sanction referred to in the resolution.  The Committee of Ministers consists of the Foreign Ministers, or senior diplomats, from the member states and the Council of Europe’s sanction against Russia did not extend to this committee.

The resolution also mentions that as of June 2017 Russia stopped paying its share into the Council of Europe budget until it is allowed to return to the Assembly.

This was the part of the resolution that Ukraine tried to amend and Kremlin media tried to make seem so important in its distorted version of the story. In fact Ukraine merely wanted to include in the resolution that Russia’s withholding of its dues is a form of blackmail and that Russia violates its obligations before the Council of Europe.  These were not accepted, but its other proposals were incorporated into the resolution.