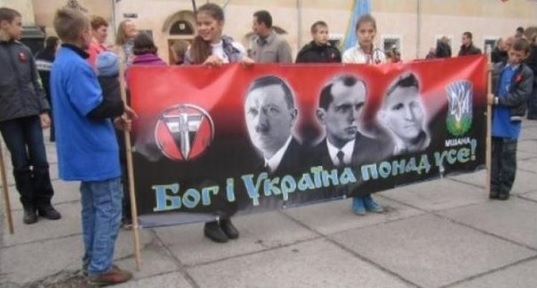 Recently a fake photo was distributed in the VKontakte social network. It depicts a portrait of Adolf Hitler near Stepan Bandera and Roman Shukhevych on the poster of Ukrainian Nationalists.

Many people sign this photograph as “Marsh UPA (Ukrainian Rebel Army) at Kramatorsk.”

It is true there was festive procession in honour of the anniversary of the UPA on October 14 in Kramatorsk. However, the original photo, distributed in social networks, have been made in Lviv on October 14, 2012.

As it can be seen, there is no Hitler on the original picture, but one of the leaders of the Ukrainian nationalist movement of 1920-1938 yy, Eugene Konovalets. This image was processed in a graphics editor, resulting that a portrait of Eugene Konovalets was replaced Adolf Hitler’s portrait.

Needs to be recalled that the Ukrainian Rebel Army (UPA) struggled against the Nazis. So it’s hard to imagine that Ukrainian patriots were holding a portrait of Adolf Hitler – the man who gave the orders to kill their fellow citizens and sent Stepan Bandera and his brothers in a concentration camp.