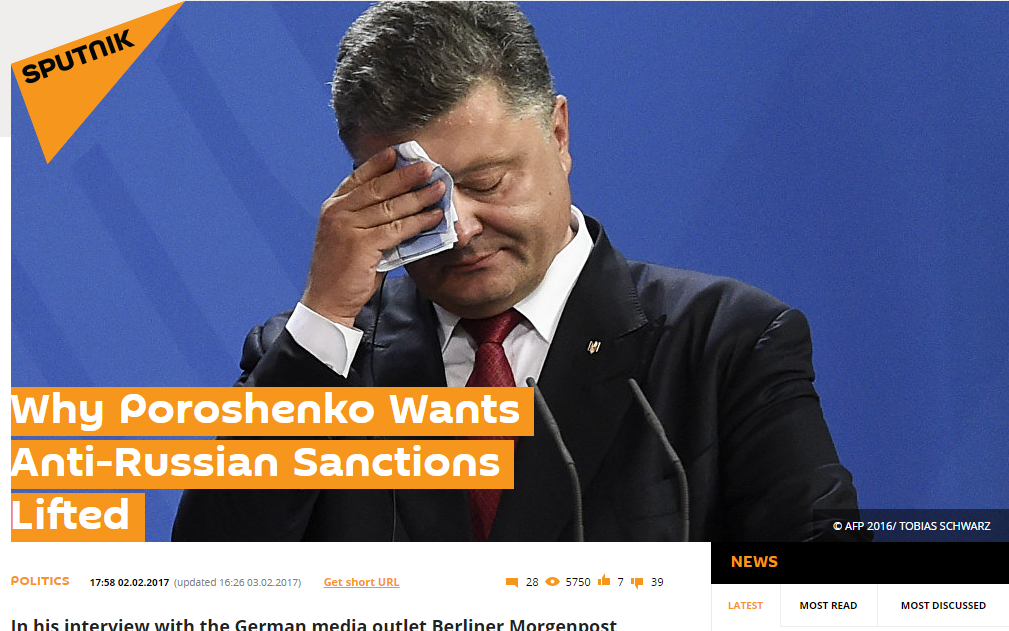 The source for this manipulated claim is an interview the Berliner Morgenpost newspaper conducted with President Poroshenko during his recent official visit to Germany.

While Poroshenko did speak about Russia sanctions, he did not advocate lifting them, in fact, and his words were completely taken out of context by Vesti, Sputnik and other Russian media.

Responding to a comment that ending sanctions against Russia would be convenient for US President Donald Trump, Poroshenko responded: “You know who, more than anyone, wants sanctions to be lifted? President Poroshenko. But first Russia must withdraw all its troops from our territory so Ukraine can reestablish its territorial integrity and sovereignty”. Premature easing of sanctions would only strengthen Russia’s aggression against Ukraine and would put Europe at risk, Poroshenko said, pointing out that sanctions are working and Russia is paying a high price for its aggression.

Not content with pulling President Poroshenko’s words out of context, Russian media elicited the help of useful commentator Yuriy Svetov who accused Poroshenko of being inconsistent and toadying up to the new American president.

Ukraine’s President  has never called for Russia sanctions to be lifted, he has called for further sanctions if Moscow fails to carry out the terms of the Minsk agreement aimed to end the Russian inspired separatist war in eastern Ukraine.

The new US ambassador to the UN Nikki Haley has said that sanctions will remain in place until Russia returns Crimea to Ukraine.