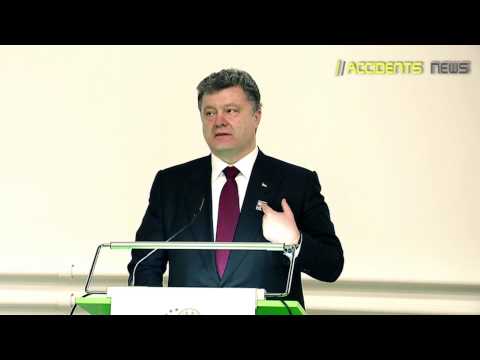 January 20, a newscaster of Russian TV channel NTV told that that the President of Ukraine held a meeting with students in Zurich. During the lecture (from 8:40) Poroshenko was allegedly “booed and whistled and his speech was interrupted several times by raised voices of the audience”.

Then we can hear in the news item the voice of a girl, allegedly a student of this Zurich university, shouting something like: “I do not want to listen to this man who was killing children”, at least this is the meaning of the interpretation from English to Russian that is provided by NTV. Petro Poroshenko replied to this: “Thank you very much”. Then the newscaster tells: “Words of the girl were greeted with applause, they were caught up by other students. Ukrainian mass media showed Poroshenko’s speech without this episode”.

Pro-Kremlin channel LifeNews also showed this version of the event. A newscaster told that the students had not wanted to listen to Poroshenko.

The same story was told by the TV channel Russia 24.

In fact, Ukrainian mass media did not show this episode because Poroshenko was not whistled by anyone. On the contrary, it was that girl, who shouted about killing children, who was whistled. And here is the episode that was not showed by NTV: the girl, who interrupted the speech of the Ukrainian leader, was hissed away, she went out of the auditorium, and at parting swore dirtily in Russian: “B**ch, f**k”. The President of Ukraine replied to this in English: “If anybody understands what she said, this is exactly the cultural level of this lady”.

Then the Poroshenko’s speech was indeed interrupted – by applause. After that Poroshenko said “Glory to Ukraine” and got even more heavy applause.

No-one from abovementioned Russian channels pointed that the girl was forced to leave the auditorium, that she swore in Russian and that the audience cheered Poroshenko’s words “Glory to Ukraine”.