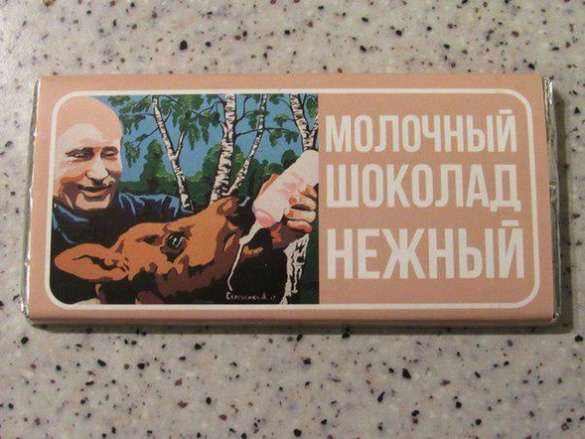 On January 11 various Internet sites published photos of a chocolate bar with a photograph of the Russian President on the wrapper. These chocolate bars were allegedly produced at the Roshen candy company in Lipetsk, Russia.

The chocolate bar wrapper done in an Andy Warhol type pop style shows a smiling Vladimir Putin feeding a calf from a bottle. The chocolate is described as “tender milk chocolate”.

The reverse side of the wrapper shows that the bar weighs 100 grams, costs 187 rubles – that’s about $2.40, and was packaged by the Roshen Confectionary Company in the Russian city of Lipetsk.

In fact the Roshen mark on the back of the chocolate wrapper is a complete fake thanks to creative photo editing.

The Belarusian site  BY24.org writes that earlier a St. Petersburg based company called Shokobox produced an entire series of edible Putin bars, that is why the wrapper of the Roshen company only says “packed by” rather than “produced by” the Roshen Company.

Shokobox responded to our StopFake inquiry and confirmed that they do in fact produce an entire series of Putin chocolate bars. You can have a tender, bitter or just plain good chocolate Putin bar, depending on your taste.

Although the chocolate bar wrappers say that the sweets were packed by Roshen, Oleg Kazakov,  the deputy director of the Roshen factory based in Lipetsk, Russia, told the Russian television station most.tv that Roshen has absolutely nothing to do with these chocolate bars.

Roshen’s home office press service has not commented on this issue so far.