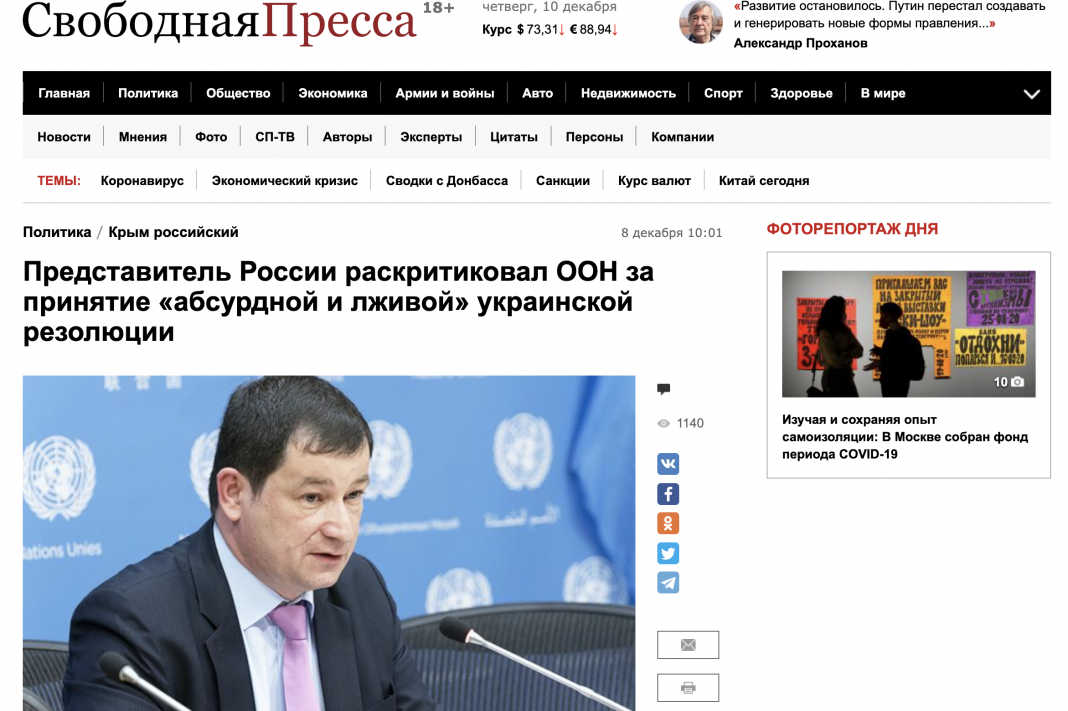 Russian media reacted with a squall of criticism to the United Nations General Assembly adopting a resolution on Crimea earlier this month, accusing the UN of Russophobia and calling the resolution absurd and false. The resolution’s call for Russia to leave Ukraine’s occupied territories  was answered with accusations of Western anti-Russian sentiments and mendacious claims that in all matters pertaining to Crimea Russia is “guided by the norms of international law” and within the framework of its international obligations. UN resolutions on Crimea which Ukraine actively advocates every year are supported by ever fewer UN member states, Russian media concluded.

Russian officials and their media were outraged by the UN resolution entitled Problem of the militarization of the Autonomous Republic of Crimea which was adopted on December 7. 36 countries supported Ukraine in passing the resolution, including European Union countries and the United States. Russian claims that increasingly fewer countries are supporting resolutions on Crimea and the UN is patently false, as this year the same number of countries supported it as last year, 63 in total. Support for Russia in battling such resolutions is waning however, only 17 countries voted against the resolution, compared with last year’s 19. But for a few exceptions, the list of those who voted against it reads like a rogue’s gallery of Russia lovers: Russia, of course, Armenia, Belarus, Cambodia, China, Cuba, North Korea, Iran, Kyrgyzstan, Laos, Myanmar, Nicaragua, Serbia, Sudan, Venezuela and Zimbabwe.

Russian media assertions that the Kremlin’s policies in occupied Crimea are guided by the norms of international law is a laughable slice of misinformation that Moscow has been actively promoting since 2014, despite official UN resolutions calling Russia the occupying power. This year’s resolution once again calls Russia the occupying power, the occupation and annexation of Crimea illegal and in violation of international law and lists at least seven UN treaties and documents that Russia violated in invading and grabbing Ukrainian territory.

Russian claims that Ukraine lost the right to Crimea and shipping routes adjacent to the Black and Azov Seas are further misinformation. Ukraine has every right to use both seas according to international norms. Russia’s occupation of Crimea does not deprive Ukraine of the right to navigation in its inland seas. This provision is part of the UN resolution, paragraphs 13-16, calling on the Russian Federation to refrain from impeding the lawful exercise of navigational rights and freedoms, exercised in accordance with applicable international law, including provision of the 1982 United Nations Convention on the Law of the Sea in the Black Sea, the Sea of Azov and the Kerch Strait.

The main difference between the 2020 UN resolution and previous resolutions on Crimea is the position that Russian occupation of Crimea is damaging the architecture of international security, violates a number of international arms control treaties and that Russia’s control over nuclear weapons storage facilities in Crimea may pose a threat to regional stability. For the first time the resolution mentions the illegal construction of warships in Crimea, the construction of the Tavrida highway and the bridge across the Kerch Strait as instruments of the further militarization of Crimea.