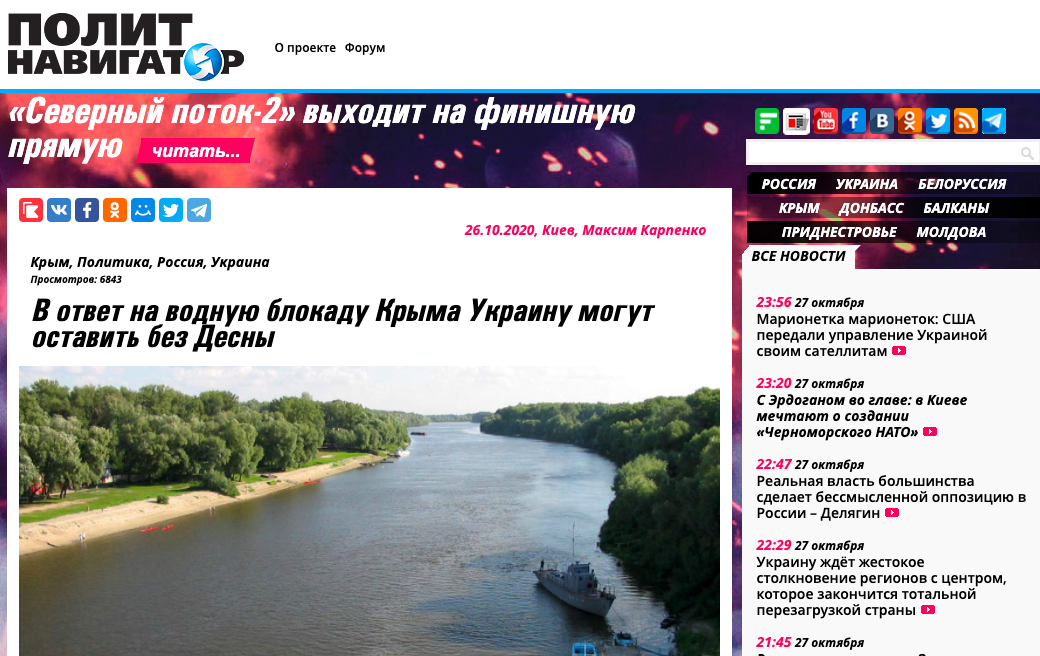 A new misinformation narrative appeared last month about the closed North Crimean Canal which provided water to the Ukrainian peninsula before Russia annexed the territory. The fake cites Kremlin official Georgiy Muradov, who said Russia could take revenge on Ukraine for the water blockade by blocking the river Desna, a northern tributary of Ukraine’s main river and water source, the Dnipro and thus severely limiting the Dnipro’s capacity to provide water for Ukraine.

Crimea has long suffered from water shortages. Before the annexation, water procured from the Dnipro River in Ukraine, via the North Crimean Canal, provided 87% of the territory’s water. Following the 2014 annexation by Russia, Kyiv cut off water supplies from the mainland.

Fake stories about Ukraine being deprived of water from the Dnipro appeared in Politnavigator, NewsFront, the orthodox publication Tsargrad, Federalnoye Agentsvo Novostey, News.allcrimea, and Utro.ru.

Dnipro water – the main source of water supply for Ukraine, is formed by hundreds of rivers, including the left bank Desna tributary. However, the Kremlin cannot simply block the Desna, a river that originates in Russia. Desna water would either have to be transferred to another river basin or collected in reservoirs, both cases would require a new infrastructure costing millions of dollars and years of construction, says water specialist Dr. Konstantin Danko of the Ukrainian Academy of Sciences.

To proceed with such a plan territory would need to be cleared and entire towns resettled.

Blocking a river upstream in order to limit water flow is impossible, the river will continue to flow, Dr. Danko explains. Its water has to be either collected somewhere or redirected. If water is to be collected then a water reservoir must be built, something along the lines of the six current water reservoirs on the Dnipro River. If Desna water is to be transferred to another basin, then Russia will have to deal with topological problems, such as raising the watershed, Danko said.

According to Dr. Danko, even if Russia does resort to blocking the Desna river, the river Dnipro will only lose some 6% of its total water volume. Much of Desna’s water volume is created by tributaries in Ukraine, such as the rivers Seym and Oster, only one fourth of the river’s water volume actually comes from Russian territory.

The Crimean water blockade narrative and Russian plans to get even with Ukraine for stopping water delivery is a popular theme in Russian media. StopFake has debunked several stories from this genre, that Ukraine has buried the North Crimean Canal and that Ukraine’s Crimea water blockade has resulted in an environmental disaster.