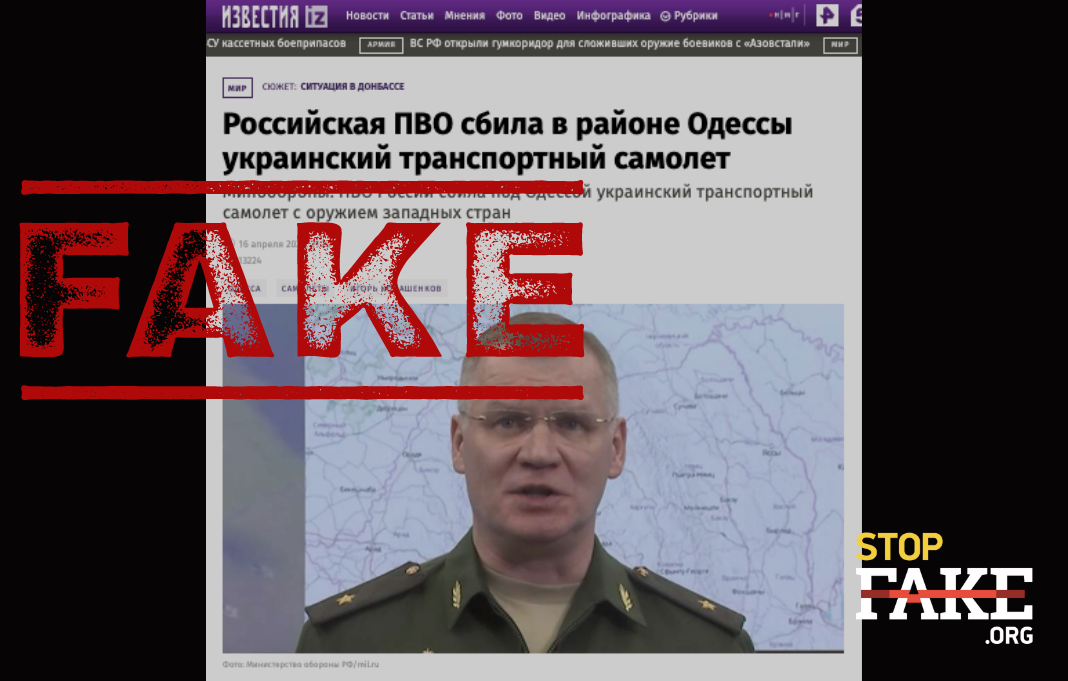 There is no evidence that the Russian army actually shot down a Ukrainian transport plane in the Odesa region. Ukraine’s Defense Ministry, the Pentagon and local media all refuted these Russian reports.

Major General Igor Konashenkov, a representative of the Russian Defense Ministry announced that Russian air defenses shot down a Ukrainian transport plane near Odesa, which was carrying weapons from Western partners. Several Russian media immediately disseminated this information. Another attempt by the West to deliver a large batch of weapons to Ukraine failed,” the site Topwar.ru declared.

Konashenkov made the announcement during an April 19 briefing. “Russian air defense systems in the Odesa region shot down a Ukrainian military transport aircraft, which was delivering a large amount of weapons supplied to Ukraine by Western countries,” he said without offering any details.

This announcement, like many other Russian Defense Ministry announcements are not accompanied by any evidence. The downing of such a large aircraft, particularly close to a large city, should have been noticed by local residents and at least some media. Local Odesa news sites only reported on the Russian Defense Ministry’s claim, not on the actual alleged downing of the plane, which no one had actually witnessed. Other local media outlets immediately classified the Ministry’s announcement as a fake and reported it as such, specifying the information was unverified. The Odesa Courier website explained that this claim was clearly fake as “Ukrainian military transport aircraft have not been flying since the first day of the war as this is deadly for the aircraft and its crew and only Ukrainian Air Force planes have been allowed to fly.”

On April 16 Ukraine’s Southern Command informed about Russian missile strikes in the Mykolayiv region, military operations in the Kherson region and the possibility of missile strikes from Russian ships in the Black Sea, there was no mention of a downed transport plane.

The Pentagon also denied that a plane delivering Western weapons to Ukraine was shot down by Russia. “We have no indications that any western equipment or shipments have been — have been hit or deterred by the Russians” Pentagon Press Secretary John F. Kirby said during the April 19 Pentagon briefing. He also added that there is no indication that the Russian had successfully attacked warehouses in which western weapons were stored.

A Bulgarian language version of this story can be accessed here.

Earlier StopFake refuted a fake Russian story claiming that Turkish citizens held in captivity in Mariupol were rescued by Russia.