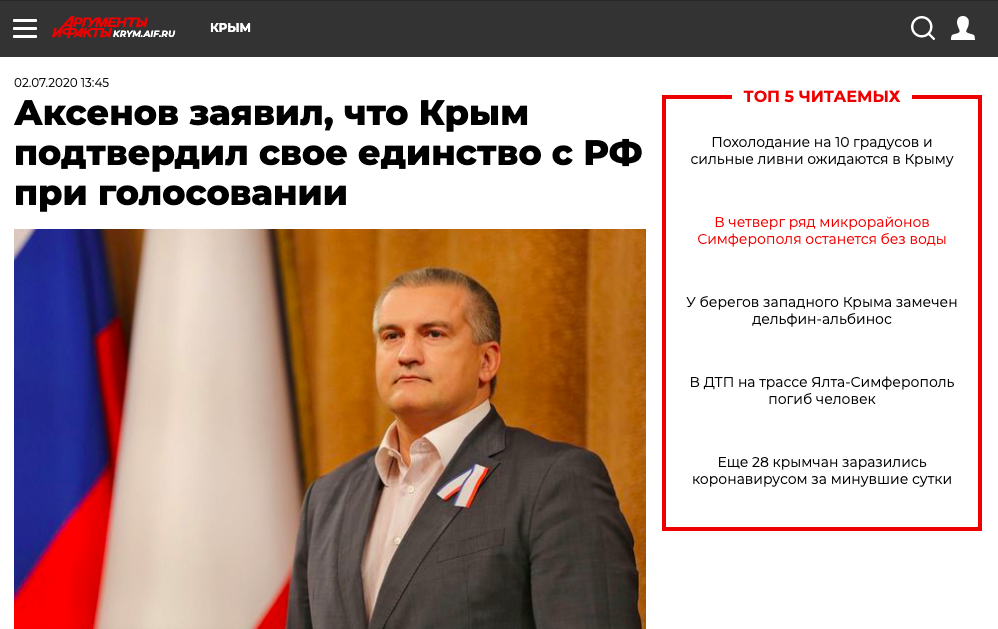 The week long vote on constitutional changes in Russia that took place from June 25 through July 1 created quite a stir in both Russian and Crimean media. The fact that the vote was largely symbolic as the Russian parliament had already passed the changes did not seem to bother anyone. In addition to amendments that allow Vladimir Putin to run for further presidential terms and potentially remain in power until 2036; other constitutional changes include “protecting the integrity of Russia”. It was this item that gave rise to scores of fakes on the part of Russian officials, who claimed that this change will forever consolidate the Russian status of Crimea, the peninsula Russia seized from Ukraine and annexed in 2014 and make the return of Crimea to Ukraine impossible. This thesis was used as a battling cry to bring Russian voters to the poll: “Constitutional amendments will forever block all attempts to wrest the territory from the Russian Federation. This means that Crimea and Sevastopol will always be Russian.”

RIA Novosti, Rossiyskaya Gazeta, Regnum, Argumenty i Fakty, TASS, Parlamentskaya gazeta and many others all featured various version of this fake narrative.

To buttress this argument the turnout in Crimea had to be high, and according to Russian media it was high (of course) thereby confirming the 2014 Crimean referendum  (held at the point of a Russian gun) that Crimea wanted to be part of Russia, the narrative goes.

Neither the 2014 fake Crimean referendum nor the Crimean poll on constitutional changes are recognized by the Western world. Ukraine’s Foreign Ministry emphasizes that the result of this Russian vote in Crimea is legally null and void, has no legal standing in the world and is not recognized by Ukraine or the international community.

The EU also condemned conducting the constitutional changes poll in annexed Crimea, pointing out that holding the vote on occupied Ukrainian territory is a violation of international law. This position is shared by the United Kingdom and the United States.

The US embassy in Kyiv tweeted: “We are very concerned that Russia is using Crimea to conduct unauthorized polls, again violating Ukraine’s sovereignty and territorial integrity. We firmly repeat that Crimea is Ukraine”.

Ukraine’s Foreign Minister Dmytro Kuleba echoed this conviction saying that not a single Russian law, whether it be enacted legislation, a presidential decree or an amended constitution can stop the eventual de-occupation of Crimea. “Crimea was, is and will be Ukrainian” Kuleba said.