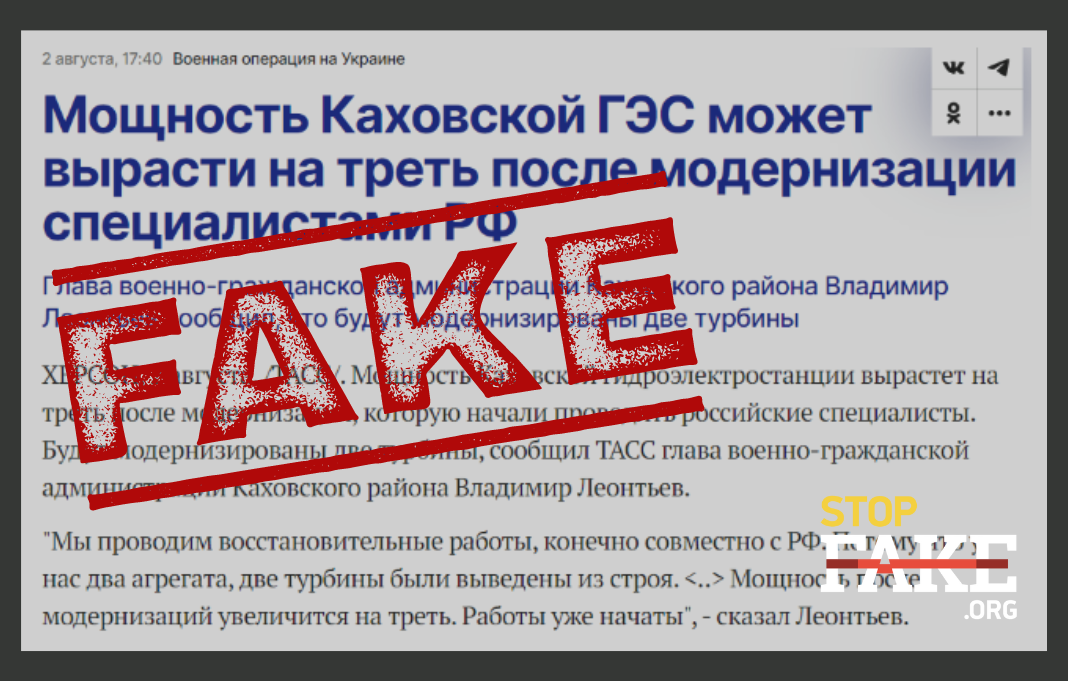 Russian forces seized the Kakhovka (a run-of-river power plant on the Dnipro River in Nova Kakhovka, southern Ukraine) in the first days of the Russian invasion of Ukraine. Much of the equipment needed for modernization of the plant is produced only in Ukraine or in EU countries. In order to install more powerful equipment, it is necessary to alter the power station’s design, this in turn can damage the plant’s reinforced concrete dam. Such work would last for several years and would raise capacity only by some 5% and not the 30% that Russian propagandists claim.

Along with pro-Kremlin sites, this claim was also actively disseminated by a multitude of channels on the  Telegram cloud based instant messaging service such as Glavnoye v Khersone, Kukhnia Rodgersa, Yuzhnyi Region/Novorossia, which target the southern Ukrainian regions currently occupied by Russian forces, promising residents who are currently suffering from electricity shortages, a 30% increase in the station’s capacity.

According to Ukrhydroenergo, the Ukrainian energy company that operates the Kakhovka plant, now controlled by Russian forces, a 30% plant capacity increase as a result of some hypothetical upgrade, is simply impossible.

Responding to StopFake’s inquiry about the Russian claims about raising the plant’s output, Ukrhydroenergo said the following in a statement: “In order to significantly increase the capacity of the plant, the flow path must be changed, this is a costly process and risks damaging the reinforced concrete dam structure. It would take more than two years to change the water’s flow path. According to the Ukrainian Energy Machines company and the Ukrhydroproekt Institute, using the existing structures and utilizing the most advanced technologies, it is possible to increase the plant’s capacity maximum by 10%. In practice it is more likely it will be 5%.”

Ukrhydroenergo also informed StopFake that using foreign equipment to modernize the Kakhovka plant is impossible due to Russia sanctions, and adapting Russian-made technology for use at the plant also requires considerable time.

Although companies such as Ukrainian Energy Machinery have their roots in Soviet industry, the current state of this enterprise is such that its technologies are more advanced than their Russian counterparts, due to Ukraine’s cooperation with international energy organizations and manufacturers. To install Russian made equipment, alterations must be made to the plant. At least a year would be needed to produce the necessary equipment and foreign components and software would be required to connect the new equipment to the plant’s control system. Because of sanctions, Russian can’t get its hands on the parts and software needed, says Ukrhydroenergo.

Russian media are also claiming that Ukrainian authorities could not operate the Kakhovka plant properly and “for 30 years could not manage to restore order at the plant.” Ukrhydroenergo dismissed such accusations saying that the plant was undergoing modernization, which was to be completed by 2026. All new equipment that the company has installed at the plant since 2000 is predominantly European made, the modernization was financed by Ukraine’s Finance Ministry and Ukrhydroenergo, a company representative told StopFake.

According to the Russian occupying forces, one of the plant’s turbines is not working, but this has nothing to do with the war Russia is waging in Ukraine.

Ukrhydroenergo refutes these Russian claims. In a statement to StopFake, the company explained that “as a result of hostilities near Kherson, the Kakhovka Hydroelectric Plant’s power grids were damaged. This caused numerous short circuits and disabled part of the station’s equipment.”

The photo of the Kakhovka plant published in Russian media, does not show works resembling the repair or modernization of the facility. But you can clearly see the equipment with the symbols of the Russian invaders and armed people behind the backs of the station staff.

StopFake learned that back in June, representatives of Russian occupation authorities assured that “the Kakhovka hydroelectric power station has fully returned to work and reached its maximum electricity generating capacity.”

This was also reported by the Russian website Tsargrad, but then the publication disappeared. Now Russian occupying forces are talking about how the station is being modernized. But instead of showing engineers working at the plant, the photo they use to illustrate their fake claims, only shows machine gunners standing behind the backs of station employees.