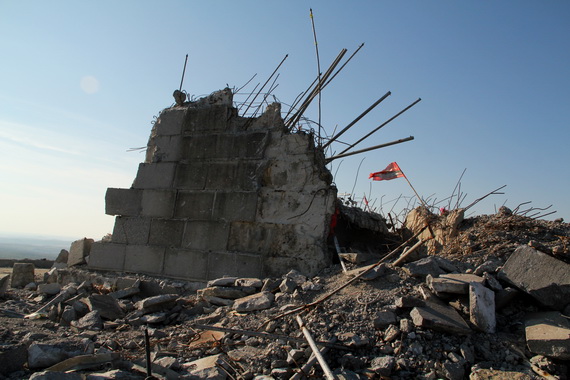 In June Russian media massively spread false information about soldiers of the National Guard of Ukraine outraging in the villages of Saurivka and Stepanivka of the Donetsk Region, slaughtering all the men and raping women.  These rumors have been still retelling in social networks and from mouth to mouth.

Let us recall that TV channel REN-TV reported about “mass killings of peaceful inhabitants of the South-Eastern Ukraine”, mentioning the events in Saurivka as the “new Khatyn”:

This very TV channel in its program Svobodnoye vremia  named the events in these two villages “Saurivka Massacre” and informed that “living people were cut in pieces in Saurivka”.

The journalist of Russian newspaper Novaya gazeta  Pavel Kanygin visited these two villages and got evidences that there had been no massacre.  Moreover, in the village of Stepanivka there had never been any soldiers of the National Guard.  The Armed Forces of Ukraine were based there, while besieging Saur-Mohyla.  Later they were forced out by the militants of so-called Donetsk People Republic.  “Some local residents tell that it was Russian tank units that fought against Ukrainians, as they were speaking with strong Russian accent. Tank column moving from the Russian border was spotted in Snizhne”, informs Novaya gazeta.

Almost half of Stepanivka is destroyed.  Some time ago there were almost 200 buildings, about 1,000 people, 3 paved streets.  Nowadays only stoves and brick walls have been left from the third part of the buildings.  Pavement is broken with track vehicles.  12 residents perished from bombardments.  Locals do not know which side was firing.  However, they did not hear about any “massacre”.

Information about massacre and raping was not confirmed either in Saurivka. In fact, only 5 people live there: two aged couples and a solitary old woman. 3 uninhabited building out of total 12 were destroyed by shells.  Those near the barrow have broken roofing slate and window glasses.

“If not for all these “dead and raped people” no one probably would think of us”, says Mykola Oleksandrovych, aged man with earflapped fur hat.
“This is a blatant lie! Why do they tell such nonsense?” says his neighbor Halyna. “Now it’s a shame to go to the city”.
“It was said that the village was plundered, all domestic appliances were taken away. Is it true?”
“No plundering was here. Some little things may have been stolen. But it was done by the locals”, says Mykola Oleksandrovych. “Neither Guardsmen, nor Ukrainians, nor men of Donetsk People Republic plundered anything”.
“Were there any occurrences of raping women?”
“There were no killings, no violence. This is all lie. Whom did they have to rape here?”

Previously on the request of Ukrainian site Informator officials of the state administration of Shakhtarsk district, in which Saurivka is situated, phoned to the local residents and officially announced after that that there had been no killings in the village.  Concurrently local history experts confirmed then that the village of Saurivka was inhabited by no more than 20 persons – all aged people.