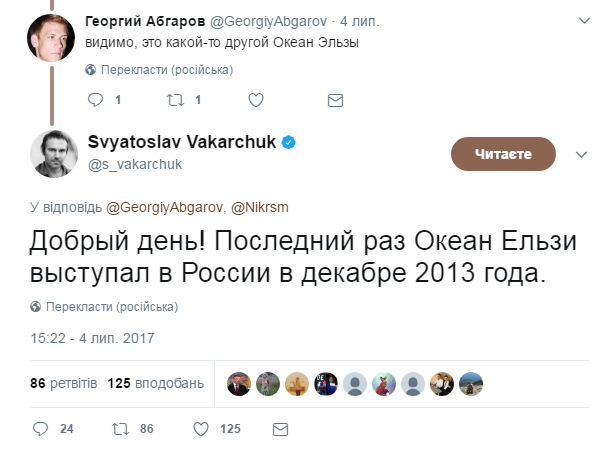 Russian fakes about Ukraine are not only focused on Ukrainian politics, but also on its culture and pop stars. Last week Russia’s first channel program Vremya Pokazhet announced that many Ukrainian pop stars were giving concerts in Russia, with the popular Ukrainian rock band Okean Elzy leading,  having performed in Russia 35 times in 2016-17.

Responding to this patently fake claim, Okean Elzy front man Sviatoslav Vakarchuk tweeted that the band has not performed in Russia since 2013. In December of 2013 when the Maydan Revolution was already underway in Kyiv, Okean Elzy were on tour in Russia. Having an influential Ukrainian group touring at that time was deemed to be inconvenient and the band was subjected to all sorts of bureaucratic and administrative problems:   they had the wrong kind of documentation for working or performing in Russia (despite the fact they’d done so many times before). Once that problem was resolved, suddenly the venues of the ten remaining gigs began reporting mysterious but unspecified “technical problems”. The remaining shows were cancelled and Okean Elzy hasn’t performed in Russia since.

Artists who continue to perform in Russia have been subjected to scathing criticism from the Ukrainian public who consider such behavior appalling and in poor taste in the face Russia’s annexation of Crimea and its invasion of eastern Ukraine.