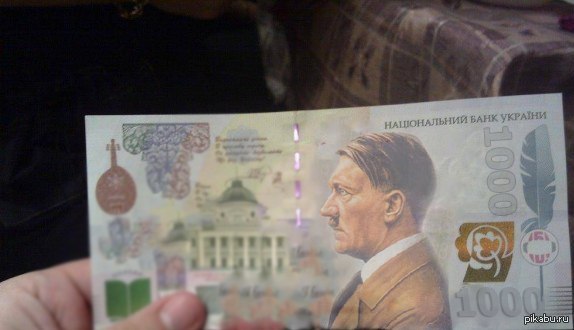 This is false. Apparently, the source of this fake news is a photo edited in Photoshop and posted on pikabu.ru, where it is tagged as “humor” and a “joke.”

The original design for the banknote carries the image of the Ukrainian writer Panteleimon Kulish. It was submitted as a possible design for a banknote in 2008, without a specific denomination; and when the National Bank of Ukraine briefly considered printing bank notes in 1,000-hyrvnia denominations in 2011, it was a contending design.

Comparing the two banknotes, the one with Hitler and the one with Kulish, we can clearly see that they come from the same source – the same background and the same hand holding the banknote. A more detailed analysis of the photo in a program that determines the extent of editing shows that the photo with Hitler was edited considerably, with part of the original image erased and Hitler’s image and the denomination amount filling the space.