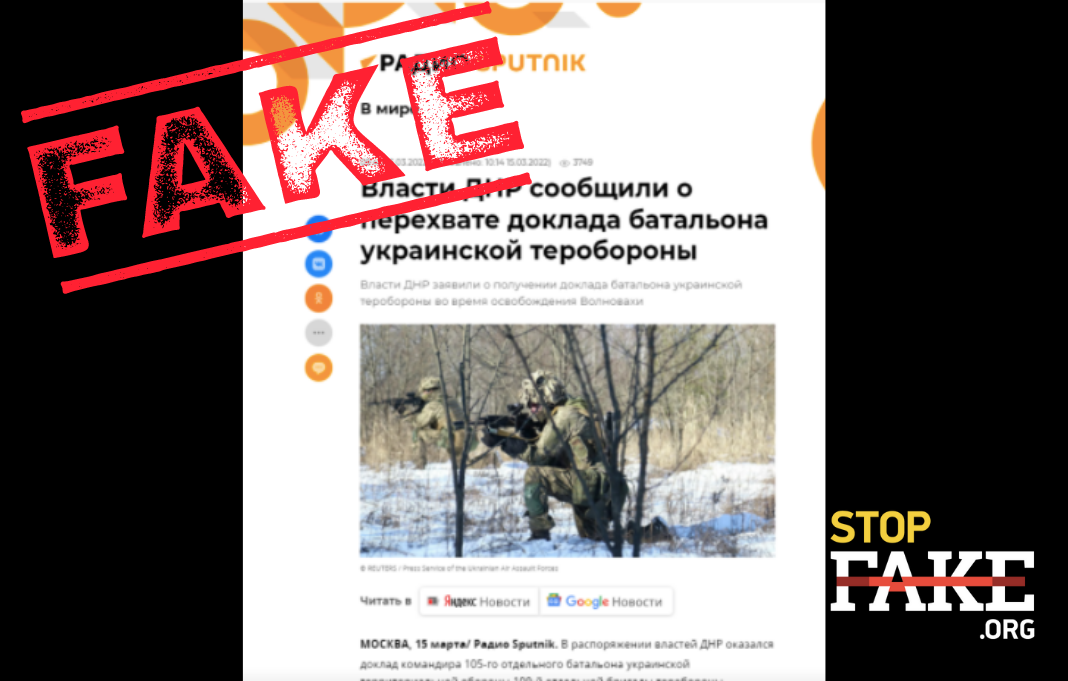 Russian media are claiming, without an iota of evidence, that Ukrainian Territorial Defense Units in the city of Volnovakha, some 60 kilometers outside Donetsk planned to attack the self-declared Donetsk and Luhansk People’s Republics (DPR, LPR). The stories are accompanied by copies of documents that Russian propagandists claim prove these plans, the documents however, have nothing to do with some fictional assault on the eastern occupied territories.

Citing the DPR First Deputy Minister of Information Danylo Bezsonov, Russian media are giddily claiming they have “solid evidence” of alleged Ukrainian invasion plans for the non-recognized separatist statelets. These stories were featured on Radio Sputnik, the Russian Defense Ministry’s website Zvezda, Radio 1, RT, as well as some Kremlin Telegram channels. The publications feature “documents” purporting to be proof of a nefarious Ukrainian plot, documents which confirm that Territorial Defense units were provided with personnel housing in July-August 2021. Upon closer examination, this evidence is nothing but correspondence between Territorial Defense representatives and Volnovakha authorities about accommodations for 72 volunteers.

According to a DPR representative cited in these fake stories, the “documents” were “found” on a computer at the recruitment office in Volnovakha. After relentless shelling by Russian troops on March 12, Volnovakha, a city of some 21,000 people, virtually ceased to exist. Currently the city is occupied by the Russian separatist militants, who have suddenly come up with “evidence” that Volnovakha is the place from where Ukrainians were planning to launch an attack on the DPR and LPR. According to the militants’ version of this alleged attack plan, Ukrainian Territorial Defense units were to be billeted in a local school and kindergarten. The number of Territorial Defense personnel, according to the militants’ “documents” was 72.

72 Territorial Defense volunteers who were on Ukrainian controlled territory could not possibly be an invasion unit headed for Russian controlled DNR and LNR. Further, their alleged presence in a school and kindergarten does not fit into any concept of a “Ukrainian attack”. Even if Ukrainian Territorial Defense volunteers were to go on an offensive, they would leave whatever premises they were in, the line of contact from Volnovakha is more than 30 kilometers. Accusing the other side of something that you are planning to do is a typical disinformation technique perfected by Russian propagandists. These latest accusations of Ukrainians hiding in schools and kindergartens are simply a cover for the Russian militant onslaught on Volnovakha.

“Strikes on these buildings would create a favorable picture for the Ukrainian authorities about the evil Russians, who hate Ukrainian children” said a representative of the DPR, thereby exposing their own plans for taking Volnovakha.

The documents presented as proof of this nonexistent invasion are actually the correspondence of Lieutenant Colonel Ihor Zahlynsky of the Ukrainian Armed Forces with Volnovakha authorities about premises for defense volunteers. The correspondence began on July 26, 2021, at the time when the Ukrainian parliament enacted a law “On the Fundamentals of National Resistance, which entered into force on July 29, 2021. The law outlines the creation of voluntary territorial defense units which would be allowed to use their own hunting weapons. An official permit for the deployment of Territorial Defense Units in the kindergarten premises in Volnovakha was issued on August 11, 2021.

Furthermore, one of the documents the propagandists present to support their outrageous claims contradicts it completely. Descriptions of the school and kindergarten in the published documents show that the school was never used for any Territorial Defense units because of organizations problems, and the kindergarten had not been used as a kindergarten because the roof was damaged, and the building had leaking issues. None of the documents and slides presented as proof of a planned Ukrainian offensive have anything to do with any offensive, they are simply a back and forth between Ukraine’s military and local authorities about finding premises to house the Volnovakha Territorial Defense unit of 72 people.