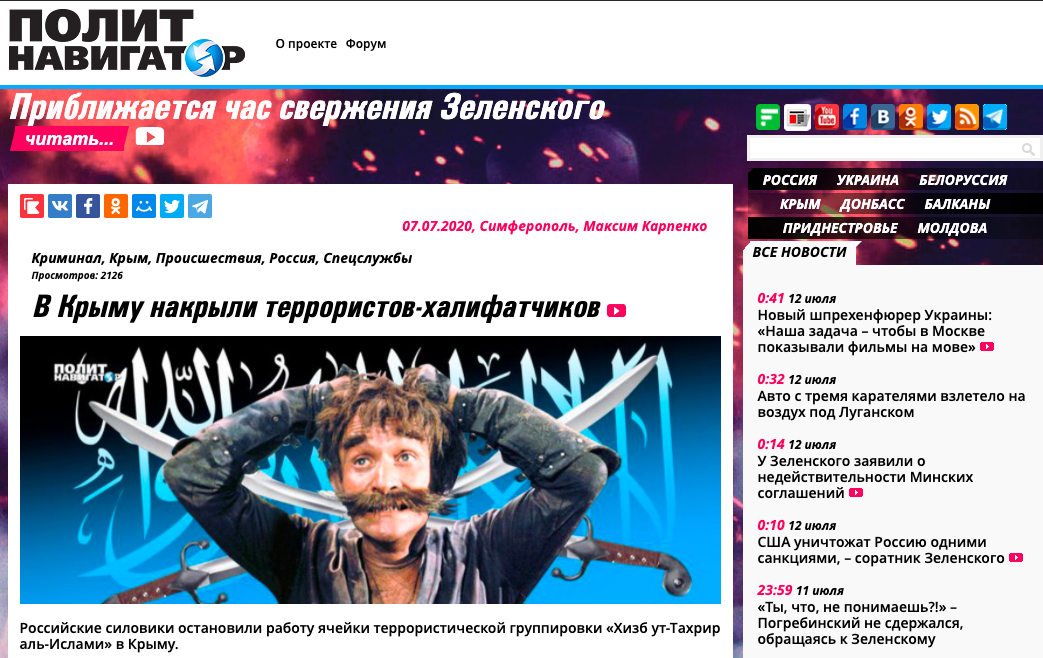 Hizb ut-Tahrir is banned in countries such as Germany, Russia, China, Egypt, Turkey, Pakistan and all Arab countries except Lebanon, Yemen and the UAE. It is not prohibited in Ukraine. International law prohibits introducing legislation of the occupying state in occupied territory.

In Russian occupied Crimea security officials continue pursuing policies of repression and severe human rights violations against the Crimean population. Russian media called this month’s  July 7 mass searches and arrests of Crimean Tatars a “fight against terrorism” and Russia’s security service, the FSB announced they had detained members of the Hizb ut-Tahrir organization, who were allegedly “spreading terrorist ideology among Crimean residents and recruiting Crimean Muslims into their ranks”. Russian media accepted the official version of the detentions and widely disseminated the story as a battle against terrorism narrative, praising the actions of Russia’s security forces

In fact the detained Crimeans are not “caliphate terrorists” as Russian media claims, but simply Crimean Tatars who disagree with the Russian annexation of the peninsula.

Under the guise of terrorism and extremism, Russian security forces in the occupied peninsula are rounding up those who are pro-Ukrainian and disagree with the Kremlin’s annexation of Crimea. Following a previously often used pattern, Crimean Tatar homes are searched, Tatars are arrested and charges of belonging to Hizb ut-Tahrir are fabricated against them. The detentions on July 7 followed this well-honed pattern used countless times in Crimea. Six of the detained men will remain in pre-trial detention until September, one was placed under house arrest because of vision impairment.

Ukraine’s Foreign Ministry protested vehemently against these Russian moves and called on the occupying forces to respect human rights, while the displaced Crimean Police have launched criminal proceedings in the matter.

The US Embassy in Ukraine issued a statement saying Russia has no rights to prosecute and detain Ukrainians on Ukrainian soil; the US OSCE mission issued a similar statement.

The European Union called the searches and arrests politically motivated and in violation of international law. The EU emphasized that the international community expects Russia to stop pressuring the Crimean Tatars.

The human rights organization Crimea SOS reports that since the occupation, the largest number of criminal cases brought against Crimean Tatars took place in 2019. Russia illegally detained some 30 Crimean Tatars on trumped up charges of links to Hizb ut-Tahrir (page 16-17). In just one year hundreds of illegal searches, detentions and arrests for political reasons were recorded. 70% of all arrested and imprisoned  on the occupied peninsula are Crimean Tatars.