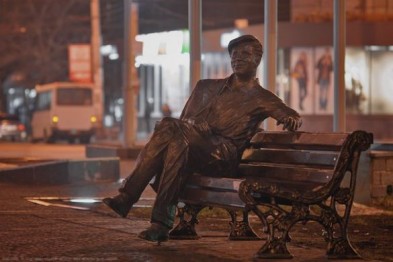 A fake is being spread around social networks, publics of so-called “Donetsk People Republic” and “Novorosia” and pro-Russian sites.  This false news alleges that the monument to Sasha Savchenko – the main character of the film “Vesna na Zarechnoy Ulitse” (eng – “Spring in Zarechnaya Street”) was demolished in Zaporizhzhia It is reported that the monument was destroyed, after a mob did not succeed to fall down the monument to Dzerzhinsky.

This information is untruthful.  As reported by Zaporizhzhia journalists, the monument in the form of a bench, dedicated to the main character of the film “Vesna na Zarechnoy Ulitse” Sasha Savchenko, still stays on the Metallurgists’ Avenue.  The other day somebody made an inscription with a white marker that was rubbed soon.