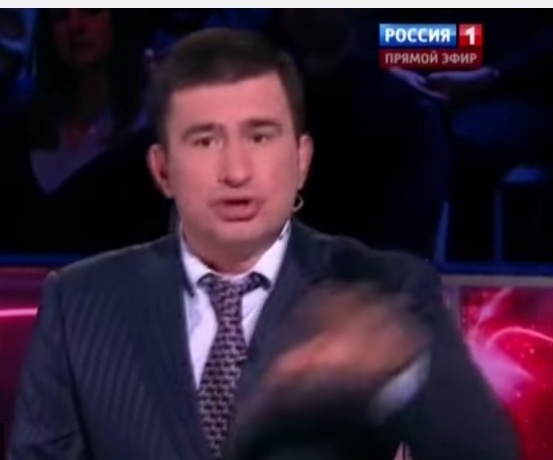 Russian TV channels chase each other telling that Ded Moroz (Father Frost) was allegedly forbidden and replaced with Santa Claus in Ukraine. On November 17, the TV channel REN-TV informed about this.

Then the Channel One joined (starting from 00.20): “Kyivans will have to celebrate New Year’s Eve without Ded Moroz who seems to became a fair game on the wave of lustration. The mayor’s office made public the program of celebrations, and there is no single word about him there. Residents of Kyiv will be congratulated by Saint Nicholas, who is known worldwide as Santa Claus. This year Saint Nicholas will come without Snegurochka (Snow Maiden) to Sofiyivska Square. There the main Christmas tree of the country will be mounted and the New Year parade will be held. However, it seems that this parade will not be very popular. It became known that organizers of private parties in plazas were going to keep to the tradition and to use the old familiar character of Ded Moroz.”

And on TV-channel Russia 1 the former member of the Ukrainian Parliament Ihor Markov, who took the Russian actor Mikhail Porechenkov to Donetsk airport to shoot at positions of Ukrainian militaries, declared that Ded Moroz was abolished in Ukraine “because he is a Russian” and the celebration of the New Year was also going to be forbidden because of this.

If you listen attentively to the audio, you can even hear the voice of the moderator Vladimir Soloviev, who inquires quietly: “Is it true?”

But the New Year was not abolished in Ukraine, Ded Moroz was not forbidden, and there’s a world of difference between Saint Nicholas and Santa Claus.

Speaking about forbidding of Ded Moroz Russian TV channel refer to the program of the New Year celebration from the Kyiv city administration. “This year Kyivans and guests of the city will be presented with interesting and fascinating program of the celebration of the New Year and Christmas. The rich program of events in different places of the city was approved by the Kyiv mayor. The celebration will start on December 16 with Christmas fair on Sofiyiivska Square, which will last till January 19, 2015. The opening of the residence and festival of Saint Nicholas will be held on December 19 on the territory of the National conservancy area ‘Sofiya Kyivska’. The same day in the evening the main Christmas tree of the country will shine with festive lights on Sofiyivska square,” informs the website of the Kyiv city administration. Indeed, the program does not mention Ded Moroz, but it also does not forbid him. The main Christmas tree will be traditionally lighted up on the Saint Nicholas Day, that’s why the key figure of the celebration is Saint Nicholas. There is already the layout plan of the main Christmas tree of the country.

Besides, this year Ukrainians have 9 official New Year day-offs. Chocolate Ded Morozes have been already sold in stores, including those of ROSHEN factory, owned by the President of Ukraine. So, nobody took away Ded Moroz either from children or from adults.