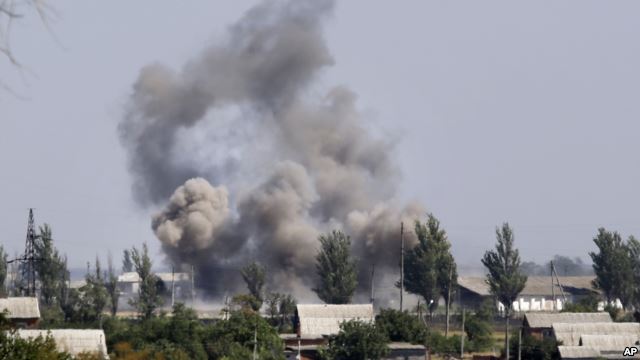 Authorities of the Russian Federation, representatives of State Duma (Parliament) of the Russian Federation, and representatives of Russia in international organizations repeatedly claimed and continue to claim that currently the Russian army is not present in Ukraine.  However, numerous facts obtained by the North Atlantic Treaty Organization (NATO), the U.S. State Department, Polish intelligence, journalists and the Ukrainian army refute this claim.

“There are no Russian armor convoys [in Ukraine],” said Andrey Kelin, Russia’s permanent representative to the Organization for Security and Cooperation in Europe (OSCE) after a meeting of the organization’s Permanent Council, RIA Novosti reports.

Title: The Russian Federation at a meeting of the OSCE’s Permanent Council stated that there are no Russian soldiers in Ukraine.

“Some people claim that we sent regular troops there [Ukraine].  What a nonsense.  If we send regular troops there, we will be in Kyiv tomorrow, nobody will intrude there with regular troops,” stated Gennady Zyuganov, the chair of the Communist Party of the Russian Federation in interview with the TV channel Russia 24.

However, NATO published new satellite images, showing Russian armed forces being used in military operations on the territory of Ukraine.  In addition, these images, made at the end of August of this year, depict Russian self-propelled artillery, which was moved in a convoy through a Ukrainian village and then prepared for a combat to reinforce fire emplacements near the area of Krasnodon in Ukraine.

All images are available on the website of NATO.

“Over a thousand Russian soldiers are fighting in Ukraine,” said a representative of headquarters of Joint Forces of NATO in Europe at the briefing in the Belgian city of Mons on Thursday.  “A thousand is a very conservative number,” he added.

“In the last hours we received another confirmation that Russian regular army units are operating in the Eastern Ukraine.  This information comes from NATO, however it is also confirmed by our intelligence and these facts are unambiguous,” stated on Wednesday Polish Prime Minister Donald Tusk during his speech in Polish Sejm.

Information about Russian troops in Ukraine is also confirmed by other sources.  The New York Times correspondent in Novoazovsk, Andrew Kramer, has reported that the Russian army invaded Southern Donbass and the Ukrainian army retreated from Novoazovsk to Mariupol.

“The most recent information from Ilovaysk. In Kuteynikovo, a regiment of the Airborne Troops of Armed Forces of the Russian Federation (the Pskovsk division) is stationed. In Novokaterinovka, there is another regiment of the Russian Airborne Troops (the Kursk division).  The tanks are being dug in. Double encirclement,” wrote on his Facebook page Semen Semenchenko, the commander of the Ukrainian battalion Donbass.