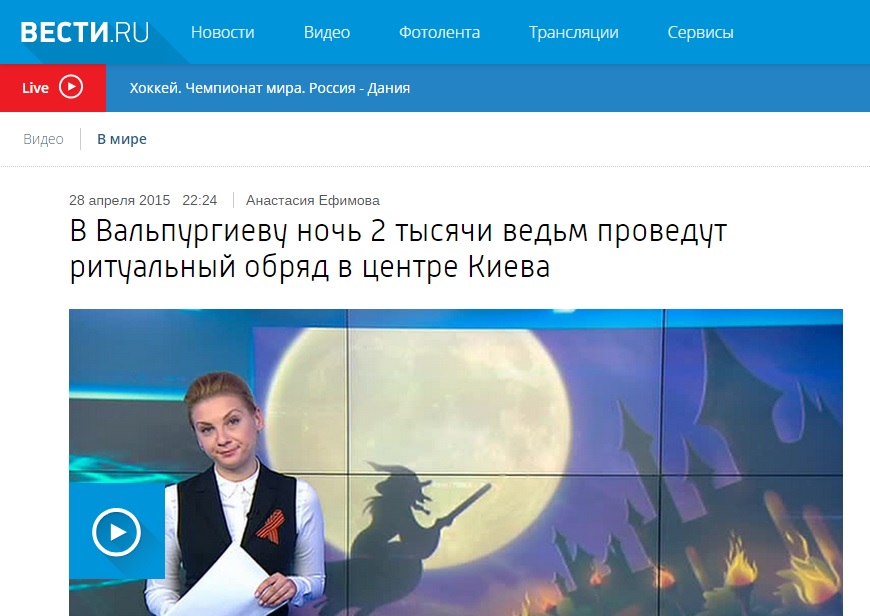 On April 28, Russia-24’s program Vesti aired a report entitled “At Walpurgis Night 2,000 Witches Will Carry out a Ritual in the Center of Kyiv.”

This news item contains the following false information (starting from 0:19): “So-called magicians assure that this action is approved by the Ministry of Defense of Ukraine in order to – I am citing – protect talismans from bullets and to send them to the so-called ATO zone.”

Then the journalist groundlessly states that the event will be “under the protection of the secret service”.

But this is false. “We neither planned such an action, nor participated in it,” the press secretary for the Ukrainian Defense Ministry, Victoria Kushnir, told Radio Freedom. “I know that this event was announced. We explained that we did not participate in it.”

The source of the fake was a leaflet that was spread in Kyiv and around social networks, falsely reporting that the Ministry of Defense supporting some “prayer” action. The event itself it was not held. The Kyiv city administration did not permit it. Instead of 2,000 magicians, a few dozen people gathered. The organizer of the “prayer” left before the action event started.