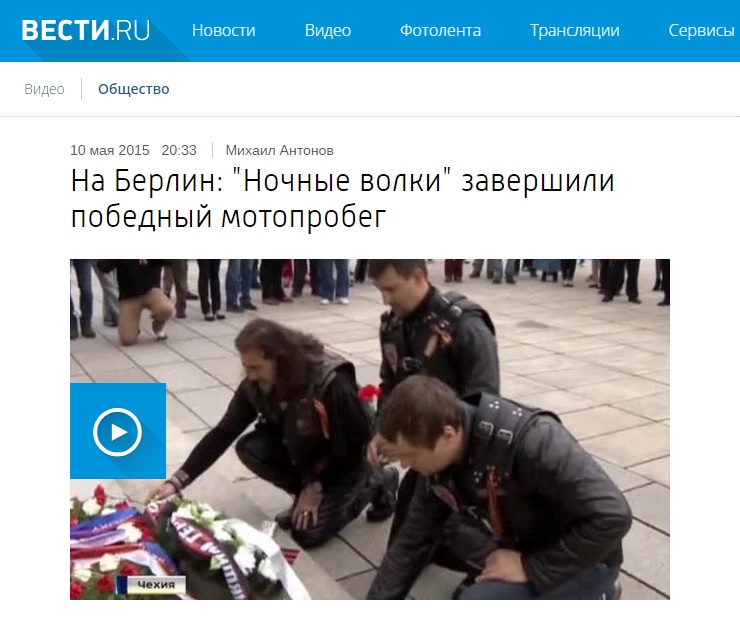 Russian newspapers and television falsely reported that, on May 9, thousands of bikers from different countries had joined a rally in support of the Russian biker gang the Night Wolves in Berlin. The Night Wolves, who are closely linked to Russian President Vladimir Putin, decided for whatever reason that it would be a good idea to “re-create” the victory WWII route of the Red Army; so they rode their motorcycles from Moscow to Berlin. Throughout Europe, it was, at best, tolerated as a tasteless – and comically ridiculous – publicity stunt. Some countries tried to deny them access.

But Russian media needed to portray it another way. On May 10, Russia-24 broadcast a video about the bikers’ tour across Europe ending in Berlin. The triumphant report was entitled “To Berlin: Night Wolves Finished the Victory Tour.”

“People, who happened to be in the Berlin downtown on May 9 at 2 p.m. could observe a kilometer-long column of motorcyclists,” the broadcast claimed. “The police have not yet made public the exact number of bikers, who were led to Germany by the Victory routes, but there were definitely more bikers than the organizers of the rally could count on.”

On May 13, Russian mass media reported that Night Wolves leader, Aleksandr “The Surgeon” Zaldostanov, told a press conference organized by TASS that 3,000 other bikers had joined the Night Wolves in Berlin.

“It became something special for us, as well as for Europe,” he said. “The more they tried to forbid us to enter several European countries, the more people joined us. They wanted to support us. As a result, fifteen bikers turned into 3,000. And they all together laid a wreath at the Soviet War Memorial in Berlin’s Treptower Park.”

But it was all appalling nonsense. In fact, on May 9, bikers from Berlin held their traditional demonstration in the German capital. The name of their performance was “Gewalt fährt nicht mit,” which means “Violence does not ride with us.”

The official estimate is that 2,800 bikers rode 10 kilometers in Berlin to protest against violence in the city, intolerance, and aggression. Berliners came to hail the German bikers and the participants of that rally. It had nothing whatsoever to do with Victory Day or with the Night Wolves.