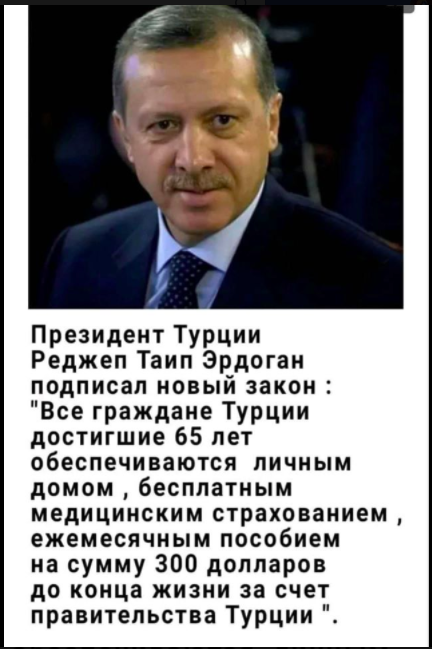 The Ukrainian segment of Facebook is teeming with information claiming that Turkish President Erdogan will issue free housing, health insurance and $300 monthly pensions to all citizens over 65. No such generous laws have been enacted in Turkey and President Erdogan has certainly not signed any into law. Official pensions will be adjusted for inflation however, based on the growth rate of pensions for civil servants amounting to roughly  $104. The Turkish Finance Ministry has yet to announce the exact amount.

If the Turkish President were about to embark on a program of social benefit generosity, such information would be widely disseminated throughout the country and it most certainly would be announced on the official presidential site. This has not happened. The last mention of pensions and pensioners on Erdogan’s website was in April of this year when he announced that Turkey would be helping those who lost income because of coronavirus restrictions, including pensioners. In February of last year Erdogan informed that the number of elderly people in Turkish nursing homes had increased from 5,000 in 2003 to 14,000 in 2019.

Turkey plans to recalculate and raise minimum pensions for those over 65 to keep pace with inflation. While the exact amount has yet to be determined, Turkish journalists have calculated that the new amount will be some 711 Turkish lira per month, approximately $104. Civil servant pensions which are currently slightly higher than average pensions will also be adjusted for inflation this year. Turkish publications Takvim, CNN Türk, Sabah and other have been writing about this issue extensively.