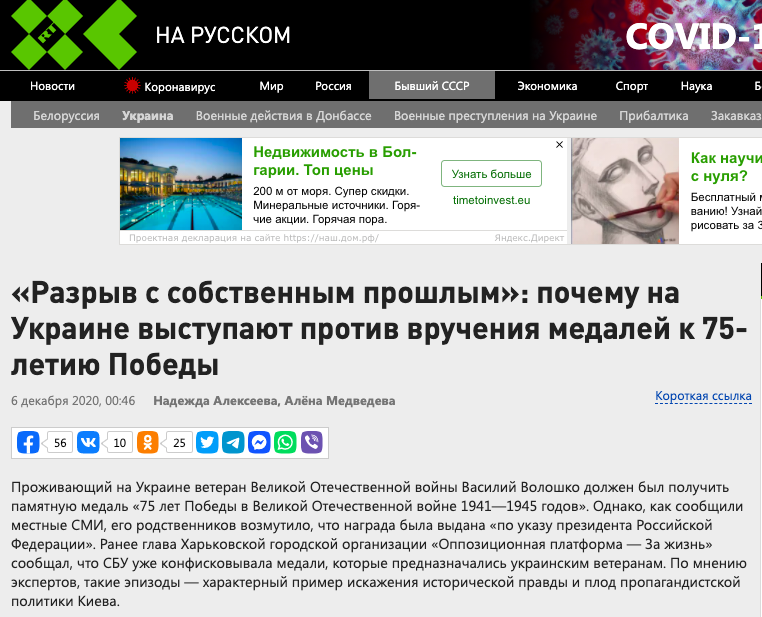 Russian pro-Kremlin media are once again accusing Kyiv of resorting to propaganda and Ukraine of distorting historical truth. According to RT, Ukraine allegedly is against honoring World War II veterans with medals on the 75th anniversary of the end of the war. Ukrainian veterans did receive commemorative medals on the 75th anniversary of victory over Nazism, issued by Ukraine’s Veterans Affairs Ministry. What people objected to were medals issued by Russian President Vladimir Putin.

According to RT a Ukrainian veteran was to receive a commemorative medal issued on the orders of Russian President Vladimir Putin to commemorate the 75th anniversary of the defeat of Nazi Germany. The medal, according to RT was confiscated, which shows how Ukraine is falsifying history and openly honoring members of Nazi organizations such as the Ukrainian Insurgent Army, a formation that was condemned by the Nurnberg tribunal.

“According to experts, in the battle against the Soviet past, Ukraine has embarked on the path of adopting fascist ideology” RT claims.

In all the 42 volumes of the Nurnberg trial proceedings there is absolutely no condemnation of the Ukrainian Insurgent Army.

In Novomoskovsk, a city in the Dnipropetrovsk oblast, the local veterans’ organization handed out 15 Russian issued medals. One family was outraged by this and intends to report the incident to Ukraine’s Security service demanding an investigation. The Dnipropetrovsk branch of Ukraine’s national veterans’ organization condemned the entire affair, criticizing those who issued the medals and those who accepted them. Nothing similar has been reported anywhere else in Ukraine.

Ukraine is not against honoring WWII veterans with medals. Earlier this year in spring, Ukrainian World War II veterans were mailed commemorative medals for military merit on the 75th anniversary of victory over Nazism issued by Ukraine’s Ministry of Veterans’ Affairs. More than 200 veterans received such awards. Various regional news sites reported about these awards