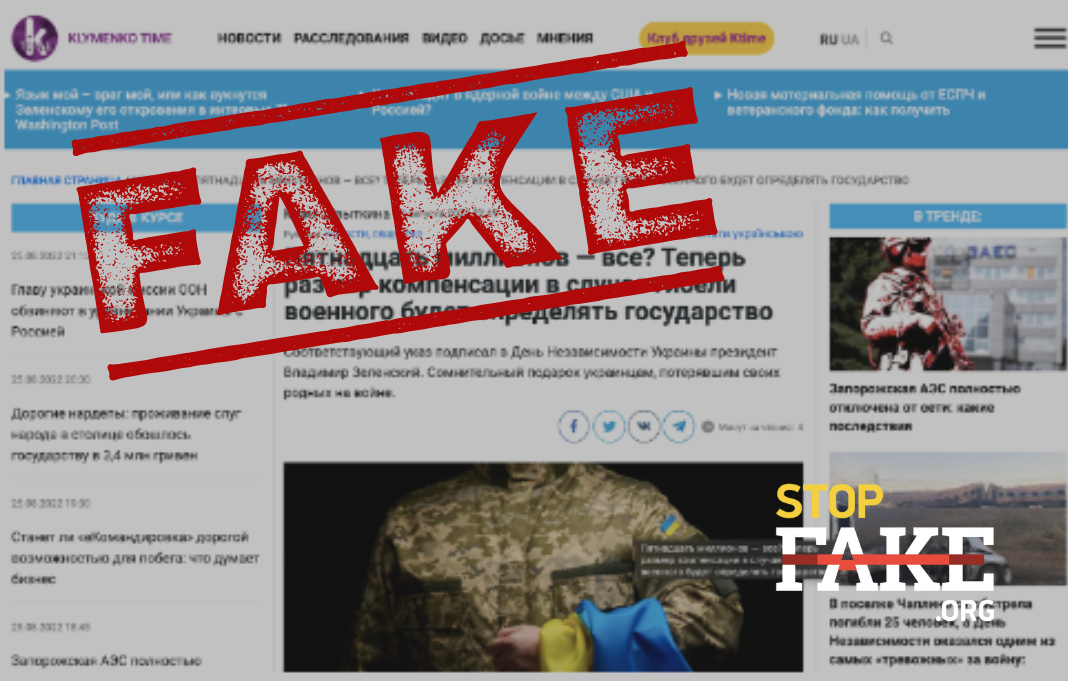 The information about the 15 million hryvnia payment to the families of fallen Ukrainian defenders “being canceled” is not true. The size of the one-time payment is determined by the Cabinet of Ministers in Resolution No. 168 of February 28, 2022.

Pro-Kremlin media is spreading disinformation about the Ukrainian government canceling benefits for fallen servicemen’s families. It is reported that now the amount of payments received by families of fallen fighters will be determined by the Cabinet of Ministers, and the previously established allowance of 15 million UAH “can be forgotten”. A number of similar stories also indicate that the Ukrainian government made this decision “to avoid going bankrupt”. After all, according to the fake Russian media “data”, the Ukrainian army allegedly suffers “huge losses” —  up to  “76 thousand dead”.

“So now, if the state considers that the family does not need any payments, they will not receive money for their hero. This is how the Ukrainian president takes care of his soldiers and their families,” the Russian media summarized.

The Kremlin media disinformation about the one-time payment of 15 million UAH to the families of the fallen Ukrainian defenders “being canceled” is based on changes in the law “On Social and Legal Protection of Servicemen and Members of Their Families”. Among the changes, which came into force on August 25,  are three points:

The pro-Kremlin fake about payments to the families of the deceased servicemen “being cancelled” is based on the last point of these changes. The disinformation was refuted by Ukrainian Deputy Defense Minister Hanna Malyar. According to her, all the families of the deceased servicemen will receive payments in the prescribed amount. Some of the people who submitted the necessary documents have already begun to receive one-time aid from the state, Malyar said.

“The one-time payment to the families of the fallen heroes —  Ukrainian defenders —  is maintained in the amount of 15 million hryvnias. The other day the media spread information about a new enacted law that cancels such payments. This is not true. On February 28, the Government approved a decision that the payment to the families of the fallen Ukrainian defenders amounts to 15 million hryvnias. Nobody canceled this decision and nobody is going to cancel it”, —  Ukrainian Deputy Defense Minister Malyar stressed.

One of the “proofs” of the “cancellation” used by pro-Kremlin media, is the information that now the amount of payment to the deceased fighter’s families will be determined by the Ukrainian Cabinet of Ministers. Such a provision is indeed fixed in the law on social and legal protection of servicemen and members of their families (article 16, paragraph 3).

However, it should be emphasized that the Ukrainian Cabinet of Ministers fixed the amount of one-time payment to the family of fallen servicemen back in the first week of Russia’s full-scale invasion. In the Cabinet’s decree No.168 of February 28, 2022 it is clearly stated that the amount of payment to a Ukrainian deceased defender’s family amounts to 15 million UAH (paragraph 3 of the decree). This amount is now additionally fixed in the Ukrainian legislation: the amount of payment is not abolished, but on the contrary —   regulated by the law.

In addition, pro-Kremlin media, reporting about the “76 thousand dead” Ukrainian defenders, refer to a fake Ukrainian Defense Ministry “document”. This “secret file” is also a lie, aimed at undermining morale and discrediting the country’s military and political leadership. The Ukrainian Defense Ministry denied these Kremlin media claims and called the “document” a “Russian fake”. StopFake discussed this narrative in detail in the article “Photo Fake: Zaluzhny reveals real losses of the Ukrainian forces in a “secret document”.