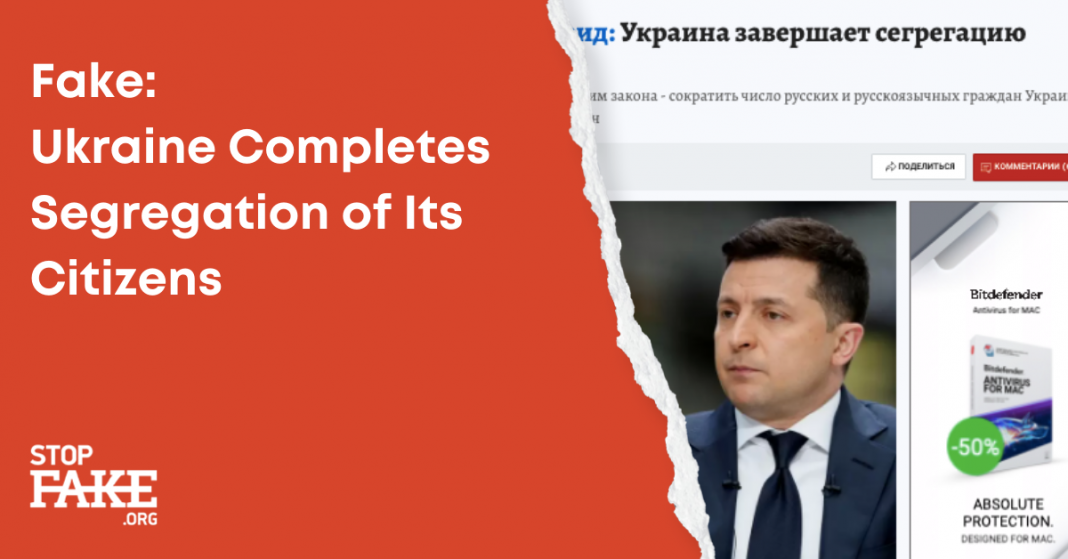 A draft law defining the term indigenous people which has been introduced in the Ukrainian parliament has brought accusations of segregation and anti-Russian bias in the Russian media. The law simply defines indigenous people at the legislative level and lays out the instruments for self-determination and dialogue with the state.

The Russian edition of Komsomolskaya Pravda published an article on May 29 dedicated to a new piece of Ukrainian legislation on indigenous peoples. Russian propaganda claims that with the help of this new “Russophobic” law, Ukrainian citizens will be divided into categories and segregation will be introduced, the number of Russians and Russian-speakers will be reduced, and apartheid will be instated.

Dmitri Steshin, Komsomolskaya Pravda’s politics department special correspondent claims that the new law initiated by Ukrainian President Volodymyr Zelensky is intended to divide Ukrainian society into several categories: “It is interesting that Ukrainians as an ethnos are not mentioned in the draft law. They are a higher sort already endowed with all the necessary rights. This is about people of a lower quality”.

Steshin questions Ukraine’s right to speak about the indigenous people of Crimea, the Ukrainian peninsula Russia forcibly annexed in 2014. “What does Crimea have to do with Ukraine?” he asks indignantly? And so what, that Ukraine is concerned about protecting the rights of Crimean Tatars, the Karaims and Krymchaks, “we don’t hear any complaints about violation of their rights” he claims. Ukraine’s purpose in proposing this legislation, Steshin declares, is to “reduce the number of Russians and Russian speakers in Ukraine as the presence of a Russian community is a threat to the Ukrainian regime”.

The explanatory note submitted with the proposed legislation explains the importance of recognizing the indigenous people of Crimea:

According to Ukraine’s Deputy Prime Minister Oleksiy Reznikov, the proposed legislation not only determines that Crimean Tatars, Karaites and Krymchaks are the indigenous peoples of Crimea, it seeks to aid in the comprehensive development of the language, culture and preservation of the identity of these people, which they presently cannot fully develop in their historical homeland – Crimea.

On the basis of this law, indigenous people will have the right to dialogue with Kyiv about their desire for self-determination within the Ukrainian state. On the basis of this law “the state will support the indigenous peoples’ activities in their organizations and institutes. The Crimean Tatars have years’ of experience of such activity through its national parliament the Kurultai and its executive body, the Medjlis. This law is about concrete support and financing of cultural rights” explained Medjlis deputy chairman Nariman Djelyal.

Furthermore, according to Djelyal, the law also shatters the ideological paradigm being built by Russia regarding Crimea. “Russia claims that Crimea is Russian land, using all sorts of spurious arguments. But here we speak about the indigenous people of Crimea, Crimea is their territory, and they have absolutely rights to this territory” Djelyal said.

During a recent appearance on the Dim television channel, parliamentarian Rustem Umerov pointed out that the term indigenous people and what differentiates indigenous people from national minorities was not delineated.

The proposed bill does not promote segregation, division into higher and lower classes of Ukrainians nor does it in any way infringe on the rights of Russian speakers in Ukraine.