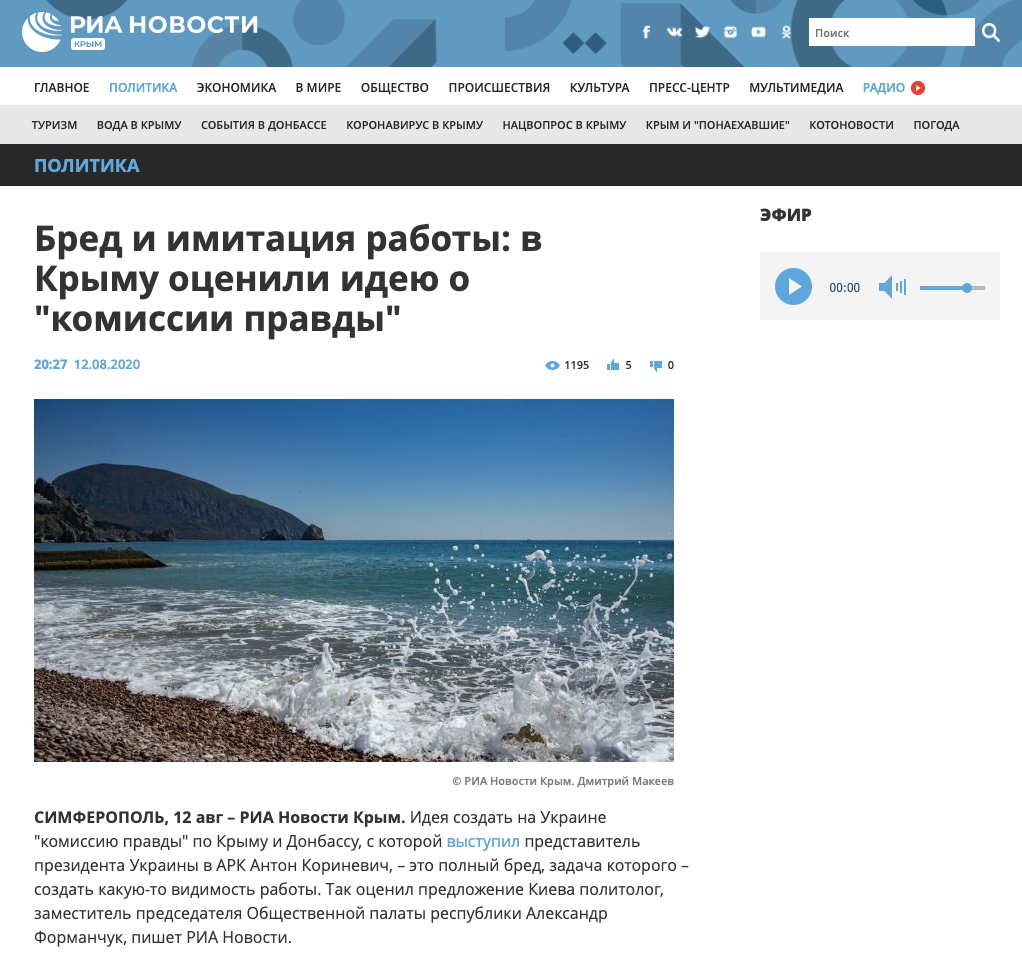 Transitional justice is not about the sale of Crimean land but rather about addressing systematic human rights violations. Transitional justice includes truth commissions, reparations programs and various kinds of institutional reforms. Within the framework of transitional justice recognition and compensation for victims of Russian aggression in Crimea is sought as well as prosecution of those who aided and abetted the Russian occupants in committing those violations.

Ukraine plans to divide Crimean territories with the help of a truth commission declared several Russian news sites, reacting to the announcement that Ukraine was planning to create a transitional justice mechanism for Crimea and the Donbas, Ukrainian territories annexed and occupied by the Kremlin. Such an idea is simply a plan to intimidate Crimeans and sell Crimean land, announced RIA Novosti, followed by Federalnoye Agentstvo Novostey, Vesti Kryma, Rossiyskaya Gazeta, Komsomolskaya Pravda and Vzglyad.

A wave of distorted fake stories on the topic of transitional justice swept through Russian media after the permanent representative of Ukraine for Crimea Anton Korynevych told Ukrainian journalists about legislative initiatives aimed at de-occupying Crimea and Donbas and reintegrating them into Ukraine.

Kyiv is building on international experience in transitional justice over the past decades by countries with armed conflicts. Transitional justice is based on four principles: bringing the perpetrators of the conflict to justice, establishing the truth, institutional reforms, and communicating the truth about armed conflict. Such models of justice have been used in Argentina, Chile, Liberia, Congo, Bosnia and Herzegovina and other post-conflict countries. The concept of transitional justice is always welcomed by the international community, as this model helps to restore the rule of law in the belligerent countries.

Transitional justice is the process of bringing peace and democracy to a conflict region. The concept is based not only on criminal law, but also on the restoration of justice after the end of the conflict. This model has nothing to do with dividing land, as Russian news sites claim. According to Anton Korynevych, one of the main tasks of transitional justice in Ukraine is to bring the invaders of Ukrainian territories and their accomplices to justice. Korynevych stresses that this pertains to only about five percent of the population.

“The concept of transitional justice is aimed at the reintegration of Ukrainian citizens in the occupied territories. There will be no mass prosecutions, but there will be no pardons or amnesties for committed war crimes, crimes against humanity and other violations. People who hold senior position in the occupation administrations in both Crimea and Donbas should be prosecuted” Korynevych said.

Teachers, doctors, state administration or social services employees dealing with domestic issues are unlikely to be prosecuted. However, official of the occupation government who are involved in the seizure of Ukrainian territories, have committed war crimes and violate human rights should not hope to escape justice. That is why Ukraine’s initiative on transitional justice has brought on such a negative response among collaborators, Korynevych said.