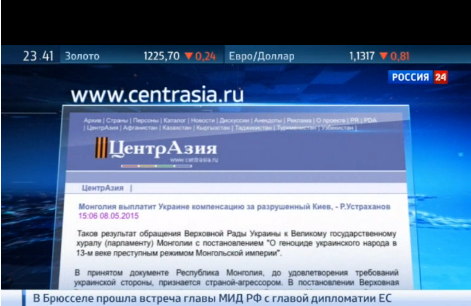 On May 18, Russia’s REN-TV falsely reported that Ukrainian parliament had adopted a resolution regarding the alleged “genocide against the Ukrainian nation in the 13th century by the criminal regime of the Mongol Empire.” According to the report, Ukraine has demanded that the Mongolian government pay compensation for Batu Khan demolishing Kyiv. The Mongolian government is then to have replied that “the world never knew any Ukrainian nation or heard about it.”

The Russian channel cites news-front.info, which in its turn gives the even more obscure site Russian People’s Line as its source. This website pretends to be an information analysis service.

The Russia 24 evening newscast is meant to show the comic extent to which Ukrainians live in another other reality and fall for obvious jokes (starting from 37:54).

The newscaster goes on to smugly comment on the credulity of Ukrainians and how they fell for a prank: “However, nowadays even worse informational bullets are aimed at common men. Many Ukrainian sites fell for an Internet joke saying that Mongolia would compensate Ukraine for the demolition of Kyiv. This will allegedly happen because of the law adopted by the Verkhovna Rada about the genocide against the Ukrainian nation in the 18th century by the criminal regime of the Mongol Empire. Well… you understand…”

They then show the Russian site centrasia.ru. But Ukrainian media did not disseminate the fake information as true. Obozrevatel reported the story, but identified it as a fake from the Russian television channel Zvezda. Zvezda’s site also reported that it was a joke. But on social networks, it misleadingly posted the material in such a way that users took it as fact.