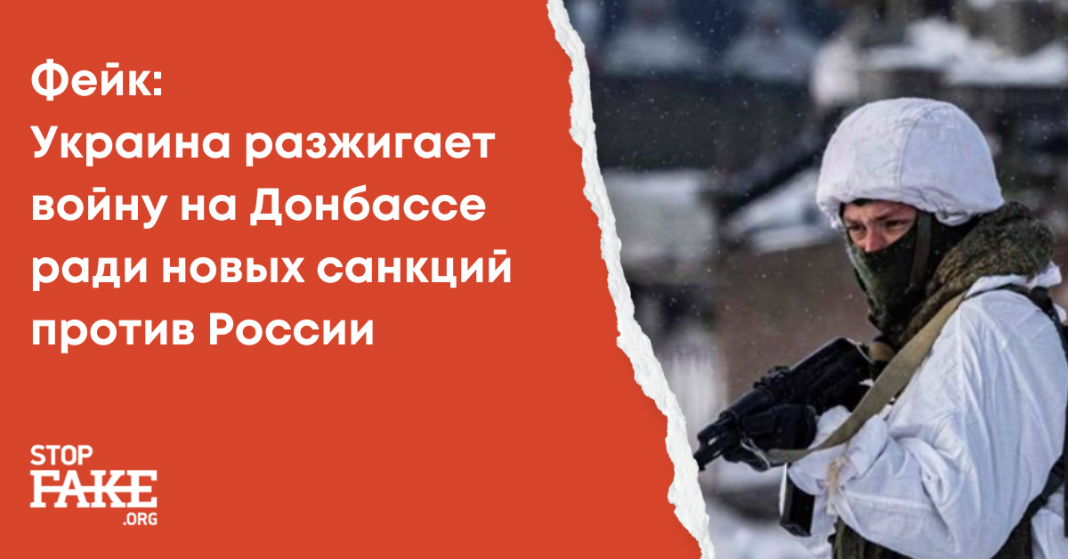 The Russian publication NewsFront continues to spread disinformation about the war in eastern Ukraine. The latest example is a claim that Ukraine is willing to incite an escalation in eastern Donbas in order to bring about additional sanctions against Russia.

The NewsFront fake about Ukraine inciting war appeared after the news site RBK Ukraina published an extensive report about the recent attacks on Ukrainian positions in Donbas and the ever more frequent reports of ceasefire violations by the Russian militants. Among the experts interviewed in the story was Member of Parliament and Parliamentary National Security Committee chairman Oleksander Zavitnevich. It was his response to a possible Russian escalation in eastern Ukraine that NewsFront distorted and misrepresented in order to claim that Ukraine would incite a military upsurge in Donbas so as to bring on new Russia sanctions.

The RBK article considers the possibility of a large-scale offensive by Kremlin controlled militants into Ukrainian controlled Donbas. Asked whether Ukraine should fear that Putin will attack, Zavitnevich responded that Ukraine is ready for any scenario. He emphasized that the price of a Russian escalation may turn out to be too high for Russia and entail new sanctions against Kremlin officials. It is these words that the NewsFront story takes completely out of context and distorts.

“The Ukrainian Armed Forces are capable of protecting us and Ukraine will not be alone in opposing Russia in the event of an escalation in Donbas or Crimea. The whole world supports us, I think such a move will also entail new sanctions against Russia, new problems are likely to be faced by Russian top officials. The price of such an escalation will be painful for them,” Zavitnevich told RBK.

The National Security Parliamentary Committee chairman also stressed that Ukrainian Armed Forces are in full combat readiness and are ready to repulse Russia in the event of a new round of aggression against Ukraine. However, Zavitnevich also pointed out that the main principle and instrument of Ukraine’s pressure on Russia is diplomacy, not military force.

During a briefing in early March, Oleksander Zavitnevich again emphasized that a new wave of Kremlin aggression against Ukraine in Donbass would lead to another round of international restrictions. He did not make any statements claiming that Ukraine “is ready to escalate for the sake of introducing new sanctions against the Kremlin.” On the contrary, Zavitnevich warned Russian officials about the consequences for the Kremlin in the event of new confrontation in the Donbas by Russia. Attacking Donbas is “the only instrument of pressure and influence” the Russian aggressor has on Ukraine. “But we are not alone here. The whole world is with us. And, I think that these actions will be appreciated not only by us, but also by the world. These are sanctions that are tougher and more effective for high-ranking officials from the aggressor country, “Zavitnevich emphasized.